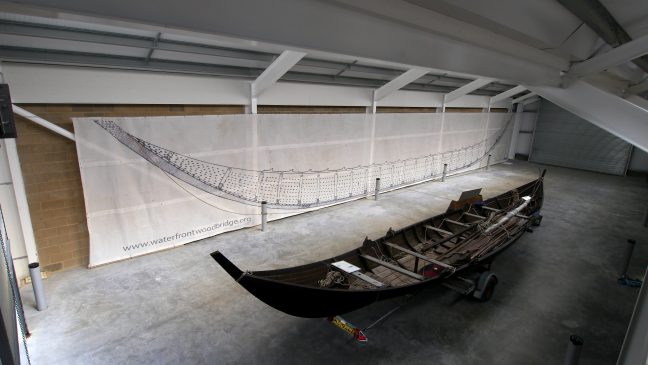 You remember those tricks of perspective, like the line with arrowheads at the end facing inward that looked shorter than the line with arrowheads at the end pointing outwards?  And the drawing that either looked like a vase or two people facing each other – but you couldn’t see both things at once?  Well, the Saxon ship is so big – and so much bigger than Sae Wylfing – that you’ll need to stand some distance away from it to just grasp the enormous scale.

We love Sae Wylfing but in truth it is only one eighth the size of the real McCoy.  Half length yes, but also half the width and half the height.  Which makes perspective a bit odd when it is filled with rowers who are not one eighth man (or woman) sized.  So it’s going to be worth waiting for the real McCoy (although I can’t think of a worse name for it!); it’s going to be so long that when it is launched for the first time the bow will look as if it’s  half way across the river at Woodbridge before the stern hits the water.