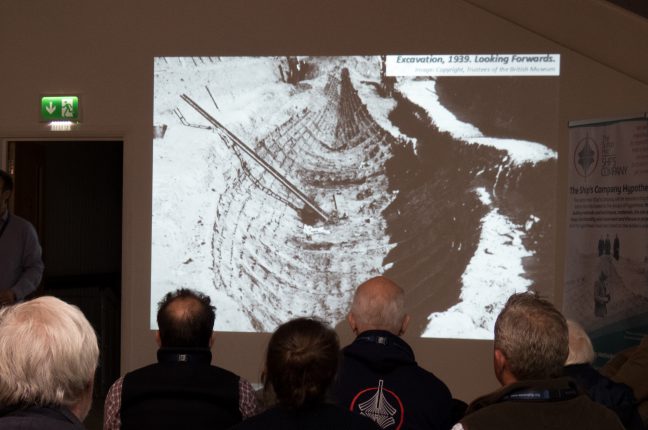 One of the main topics of conversation at the recent Ship’s Co. International Symposium was the size and shape of the hull structure.

Prior to the event on the 6th October 2018, Dr Julian Whitewright and Pat Tanner presented three papers to the delegates which consolidated their research and understanding of the hull structure, hydrostatics and propulsion. An earlier paper written by Paul Handley for The Royal Institute of Naval Architects in 2016

provided an initial starting point for their research. The three authors along with Dr Martin Carver (Trustee) can be seen in the photograph below.

Over the next eight weeks the Sutton Hoo Ship’s Company will continue to formulate their final plan with the help of Julian, Pat, Paul and other delegates from the Symposium who have worked on similar projects elsewhere.

The symposium assembled experts from far and near to scrutinise the ships plans and ask for their advice about how to move forward with things such as choosing the oak, agreeing the composition of the fastenings and looking at how the ship may have rowed. The event generated vast amounts of information which is currently being collated and followed up by The Ship’s Co. team.