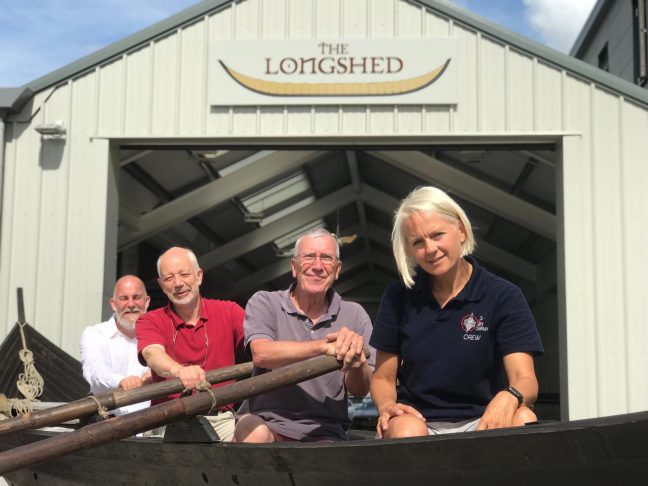 A national fundraising campaign is set to “Make Ship Happen” for a £1 million project to build a full-size reconstruction of the 7th century Sutton Hoo ship.

The scheme has been launched to pay for the venture, which will bring together archaeologists, historians, experts in construction and shipbuilding and many other skilled volunteers to reconstruct the mysterious ghost ship buried beneath the sand of Sutton Hoo across the River Deben from Woodbridge, Suffolk, for 13 centuries.

The first phase of the donation programme will allow people to sponsor one of more than 3,500 numbered metal rivets that will hold the ship together. It is hoped this will raise enough money to contract a master shipwright to oversee the build.

Different parts of the ship – the keel, the planks and the stem and stern – will then be offered up for sponsorship to pay for the rest of the build, which is likely to take about two years to complete.

Philip Leech, chairman and director of the Sutton Hoo Ship’s Company, which is responsible for the build, said: “Back in 1939 an excavation of Sutton Hoo revealed an early medieval burial ground that included the grave of Raedwald, an Anglo-Saxon king.

“The impression of the rotted-away ship’s timbers in the trench of sand showed the ship to have been a mastless, clinker-built rowboat about 90ft long – an impressive 27 metres.

“In the burial site there were 41 items of solid gold now housed in the British Museum, but although the site has been thoroughly examined by historians and archaeologists for the last 90 years, nobody has ever attempted to rebuild the full-size ship to see exactly how it worked before it was buried with the King.

“This is precisely what we plan to do.

“The build is a serious scientific endeavour and an example of experimental archaeology which is carried out by replicating or approximating the feasibility of ancient cultures.

“This is done by employing a number of methods, techniques, analyses, and approaches, based upon archaeological source material – in this instance raising a ghost ship based on the indent left by the original vessel.

“Everything will be carefully recorded so we can learn from the construction.”

The team will be using plans produced digitally from the measurements taken at the excavation. The first stage will be to complete a fifth size model before building the full size vessel.

The ship will be created using wood supplied by the Crown Estates and involve a number of volunteers who have been taught traditional building methods.

Once built, it will be tested at sea with a full crew of up to 40 rowers. If it looks possible, the team will erect a mast and see how well it sails.

Mr Leech said: “At the end of that time we will all know much more about Anglo-Saxon skills, trade and seamanship. And after the trials the ship will become a movable exhibition piece which is expected to be rowed and used for educational purposes worldwide.

“We cannot wait to watch this magnificent vessel slide down the slipway into the river, before making the maiden voyage. The beauty and dignity of this King’s ship, tied into a serious scientific programme to learn more about our past, makes for a magnificent and worthwhile spectacle.

“We hope as many people as possible get the chance to be part of making this project a reality.”

The ship will be built inside the Longshed on the site of the former Whisstocks boatyard in Woodbridge.

The workshop, which boasts a large mezzanine gallery that will host an exhibition about the project, is run by Woodbridge Riverside Trust (WRT) which is responsible for a half-length replica of the Sutton Hoo ship called Sae Wylfing.

Chairman of the WRT Bryan Knibbs said: ““We are very excited to officially get the fundraising off the ground and bring people together to Make Ship Happen.

“What this project hopes to do is give people a tangible link to the past and we need to get everyone involved – young and old – to make this a possibility.”

To sponsor one of the rivets for £20 or buy Make Ship Happen merchandise which helps fund the build visit www.makeshiphappen.co.uk