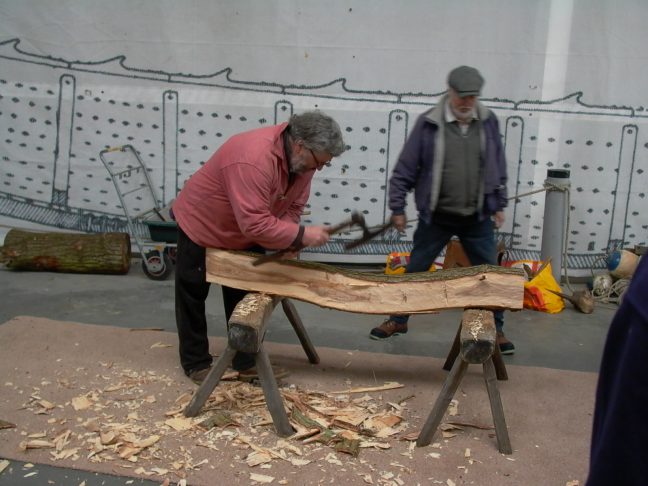 We often get asked why we are using green oak to build the Ship and why we are (where practicable) using ancient techniques.  Here, Dr Damian Goodburn who knows much, much more about medieval oak than most people,  provides us with many reasons why we should do so.  The photo above shows Damian using a side axe.

“Simply put, green logs and roughed out timbers are very, very much easier to work with human muscles than partially, or totally seasoned timbers – especially using simple hand tools, such as axes.  This is probably principally why it was used in such a green state.  And there is much evidence for the use of green timber in the early medieval period for ship building (including from Sutton Hoo and large scale woodwork elsewhere) – and no evidence against it.

Experiment and experience shows that if the surfaces of the timber are worked green an axe-finished surface is smooth with little or no tearing of the grain, with widely spaced axe marks.  Well-preserved surfaces on early medieval boat timbers and other heavy woodwork show a smoothness that would fit with this. The impression that the Sutton Hoo Ship left in the ground was entirely smooth.  Where second-hand seasoned timbers are re-used and refinished, because of the comparative hardness of dry oak the tool marks are much rougher and closer together.

Historical sources from the end of the early medieval period, and images such as the Bayeux tapestry, and other embroidery, show that timber was worked on in the woods where it was felled.  This implies rapid, green roughing out at the very least.

Later medieval ship and boatyard excavations also show roughed out timbers arrived in the yards in freshly felled condition with some work having been done at the felling sites.  The lack of drying shakes (cracks running through the timber) or any marked decay supports this – though in a few cases there was also some re-use of second-hand timber taken from earlier vessels.

Systematic tree ring dating studies of early medieval woodwork and boat timbers (all a little later than the ship burial at Sutton Hoo) show very little evidence of stock piling timbers for seasoning.  Where we do have historical dates for medieval buildings and vessels made largely or entirely of oak, for the vast majority of timbers evidence from tree-rings shows that felling was usually only shortly before the recorded date of construction.

A quick turnaround – using green rather than seasoned oak – has benefits from an economic perspective, and to avoid timber degradation from drying shakes, rot or insect decay.  Degradation is less problematic when timbers are worked into smaller sections.

In reality the terms seasoned versus green are rather misleading extremes, even today.  We might accept oak as ‘seasoned’ when moisture content is down to about 20%  or less, whereas green oak has much more moisture-sap in it.  In the early medieval period totally seasoned timber (other than second hand material) is likely to have been a rarity and for use in small high status items.

Wet storage inhibits decay and slows down any hardening before finishing.  Some strands of archaeological evidence suggest that early medieval boat and ship builders in NW Europe were well aware of the issue of controlling seasoning. There is evidence of wet-stored rough out timbers such as the Eigg stem.  Very acid bog water or salt water would probably be best.

Splitting before use may reduce drying distortion.  Radial cleaving, ie splitting the trunk across the diameter then again across the radius of each piece, produces the greatest natural strength in planks. A tangential split, ie splitting off a piece not directly across the diameter is less strong.  We believe that the Anglo-Saxons did not have saws of any size (unlike the Romans or later the Vikings) so splitting using one of these methods would have been used to produce planks.  The cleft plank would be finished (hewn) nicely with side axes.

A close look at the Bayeux embroidery shipbuilding scenes shows that the roughed out cleft boards were put up in the tree crotches to dry after splitting.  This suggests partial rapid drying of those thin hull boards.  This can only achieved without massive distortion and splitting using radially cleft boards (not tangentially cleft and hewn or sawn planks).  Oak that has been converted into boards the ancient way using radial cleaving shrinks much less (about 50%) because of the way the timber is structured.  Splitting and distortion is also limited.

Partial drying, when the wood is still relatively green, also has the advantage of making bending easier. Think of bending a fresh stick of celery compared with a slightly wilted one – the latter is much easier, but the celery is still green.  With the easy lines and gentle bends of the Sutton Hoo Ship this is only of academic interest – it probably wouldn’t have been an issue.”