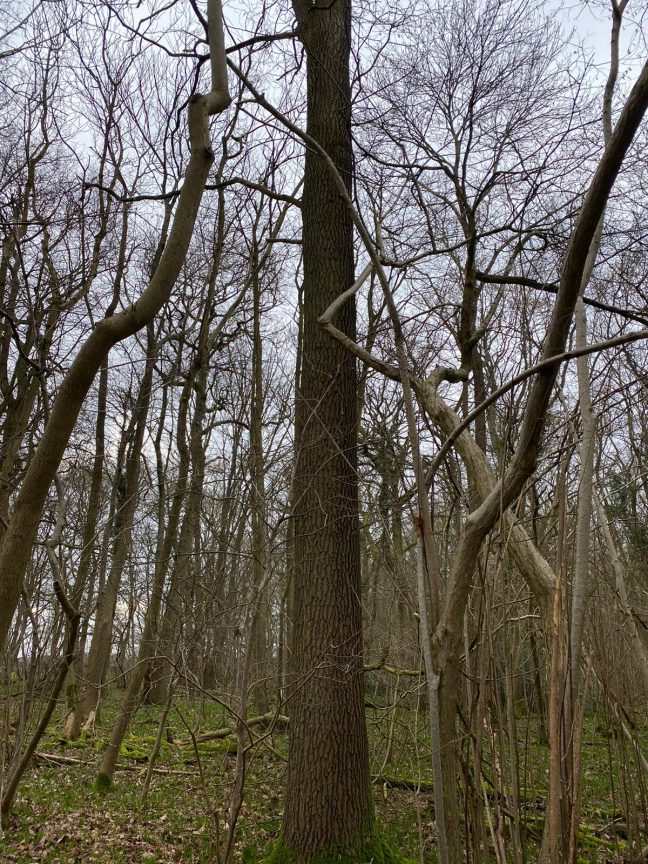 Building this great ship starts with construction of the keel.  What did we need to look for when identifying suitable trees?

The key point is that finding a straight, and nearly flawless, oak for the thin plank keel is a huge challenge in England today as we have no wildwood.  Damian Goodburn advised that “Even in early Anglo-Saxon times after intensive Roman use of the woodlands for 350 years this would have been a big challenge.  It might have been easier later once the wildwood spread out further, until the 13th century in southern England.”

A deeper section of keel that could accommodate some knots would make the challenge a little easier, but this is not an option.  That’s because we are constructing a ship that does not just exist in the Shipwright’s head.  Our aim is to build a ship that is as near as possible to the original ship that was buried at Sutton Hoo, and we are working to a plan that’s based on what was found in the burial mound. The evidence from the burial mound is that the original ship had the shallowest keel imaginable, as you can see from this cross section of a (rather smart) model that Damian made for the original exhibition at Sutton Hoo.

The keel is the T shaped section in the middle of this photo.  It is a slight thing, but it beautifully reflects the evolution of shipbuilding, from rafts, through hollowed-out logs, to hollowed out logs with planks attached at the sides to deepen the vessel, to a plank as the keel…  The keel may be slight but it is a lot more sophisticated and allows the ship to grounded without damage.  What extra strength it has over a plank isn’t clear – our ship probably flexed a good deal.  The strength to keep its shape also came from the thwarts – 26 cross pieces that it was probably possible to sit on whilst rowing.

Our keel hunters have found a beautiful, straight grained and knot free tree.  Although finding something in southern England long enough didn’t seem likely at one stage.  Even so, whilst the keel needs to be straight, the stem and stern just aren’t.  Luckily we also found a tree with a curved trunk that looks like it will fit the bill.   Damian has provided a practical solution as to what to do to make the best of our lovely straight log and the curved one as well.

“I suggest that the practice attested in later Viking longships and later medieval clinker vessels be uses, that is a keel with two linking pieces – ‘lots’ or ‘underlouts’, and stems above each underlout.  That is the main keel of about 10-11 metres with enough for scarfs each end be scarfed to more ‘v’ shaped and curved underlouts at each end about 6 metres long which are then also scarfed to the main upper stem timbers above them around 6.5 metres long.  This approach could be adapted to the actual timber obtained and adjusted as  required – though symmetry was likely.  The scarf locations would also be bridged by garboards and other bottom planking.”

For those who aren’t boatbuilders or maritime archaeologists, this means:  at the end of the straight bit of keel under the ship, the gentle curve upwards is produced by joining the keel first to one (underlout) then another, curved piece.  The overlapping joints at the end of the keel and between the two curved bits are the scarfs – as you can see the scarf joint at point F in the photo below.

And the garboards are the first planks that make up the bottom, then the sides of the vessel.  You can see them in the first photograph (of Damian’s model).

Damian again: “All the parent timbers found have to be cut out well over length ie 12-14 metres for the keel and about 7 metres, with appropriate curves, including scarfs for the underlout and stem logs.  As the late Saxon Graveney boat has a stern post made from half a log and this – two stems from one curved log approach – was widely used in practice in later medieval vessels, I would suggest that each selected log be divided in two, length-ways, by sawing and then hewn into shape with Saxon style axes.”

There is an element of revolution in that advice.  Damian is suggesting that we use saws for some of the processes and finish the work with traditional hand tools.  The heresy is to saw the logs but he makes the suggestion with good reason:

“The Anglo-Saxons did not have saws of any size.  But I personally think that splitting the log for the keel is unrealistic and could be enormously time consuming as defects in the chosen log’s grain might make each log half unusable and in large timbers the defects could be hidden inside the parent logs until too late.  Roskilde (our colleagues at the Viking Ship Museum in Denmark) have already shown that this is a perennial problem for keels and stems in early clinker vessels that are made without any sawing length-ways.”

So the point is, that you could do a huge amount of work and up with a keel shaped piece of wood that is totally unfit for purpose and in essence wasted.  A whole oak gone for nothing.  We cannot risk that.  Following Damian’s advice we will record the sawing for display and publication as a technical compromise.  Shaping the best keel slab with Anglo-Saxon tools will still be a great spectacle and a huge challenge.

So, how do we think that using a non-traditional method as part of the construction affects the project?  Is it still and authentic reception of the Sutton Hoo King’s Ship?  Our overwhelming answer is – yes, it will still be authentic.  Using sawn timber to construct the keel will not affect the weight, the strength or the appearance of the ship, and very importantly, will not impact on the validity of sea trials.  It will reduce time and expense, as well as probably saving us from wasting trees.  There are other obvious compromises that we have already accepted: did the Anglo-Saxons build indoors on a concrete floor?  Did the fell their trees with chain saws?  Were their labourers volunteers, and did they have protective equipment?

We can’t conceive of all the problems that the Anglo-Saxons overcame in building their King’s Ship.   Adopting the practical compromises that we are choosing to make just leaves us all the more in awe of what they achieved.