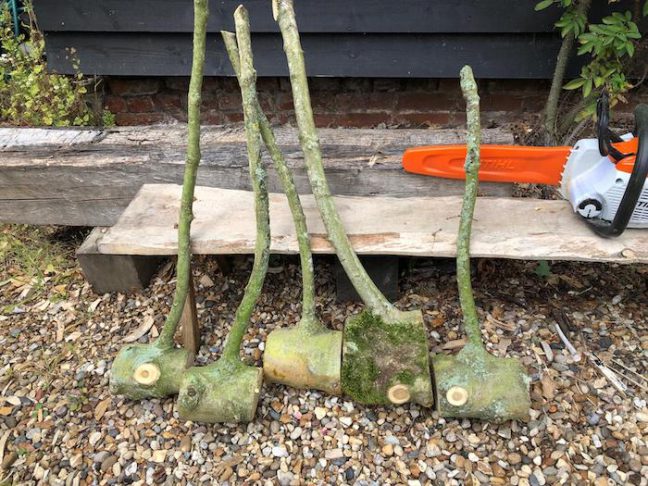 Google “maul” and you will get a variety of definitions, like being clawed by a lion or clashing on the rugby field. The Merriam-Webster dictionary is the first one I looked at that defined a maul in the sense we are using it – a heavy often wooden headed hammer – which is what we asked Damian Goodburn, a very experienced user of a special version of this tool, to tell us about.  All of us in SHSC have admired Damian’s own very special maul.

First of all, he added to the definition “Single piece mauls or mells are still used by some green woodworkers and hedge layers.   They are generally stronger than those with separate handles and heads and this allows the handle shaft to be of thinner dimensions, which absorbs shock better than the modern separate timber handle.”

Well, how on earth can you get a hammer made from a single piece of wood? Of course, Damian has the answer

“Any tough species of timber can be used  where a branch stem junction is the right shape, but if the large striking head is made of a knotty section of the main tree stem then it will last all the better.” And he knows, from experience “In my holly example the knots act as bolts holding the timber together, so it resists splitting for a long period of use. Holly is also a very hard wood and many of the branches join the main stem at about 90 degrees, just right for the job.  My example is well over 20 years old and has been used for driving wooden wedges to cleave logs and driving fence stakes etc regularly during all that time.  It still has some life left in it yet!”

And he ain’t just pussyfooting – “The largest log split using the maul was c. 1.2m diameter,  of oak and used for making the pair of bottom planks for the research and display hull section replica of the Dover Middle Bronze Age boat.”

That seems particularly apposite because, he goes on to say – “The oldest single piece maul we have in British archaeology is an early Bronze Age example of Yew from the Somerset levels.”

I hope we aren’t still going to need to be using the SHSC holly mauls in 20 years time – at least not on the current project!