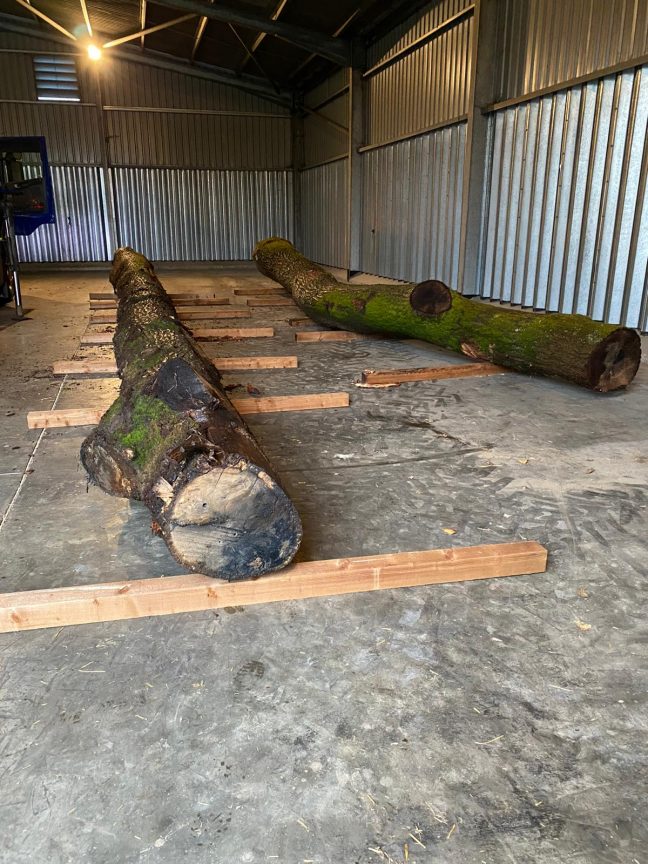 It’s here.  We have a the keel log we have been waiting for!

What a story of suspense, from first identifying the tree in a Forestry England site in Wiltshire nearly a year ago, through delays in felling, postponements because of Covid, a carrier who failed to bring back the goods, to finally manoeuvring the artic into the shed and then craning off the logs.

The log – or logs, for as well as the straight part of the keel we have the curved one for the two ends of the ship – are now safely ensconced in a barn near Woodbridge where the team will be able, soon, to do preparatory work before we bring them to the Longshed, hopefully to great fanfares.  Even without fanfares, the arrival at the barn was really quite special.  A huge articulated truck complete with (very necessary) accommodation in the cab rolled up one damp chilly January morning, into a giant barn.

Brian Amos, the driver, had been on the road the day before and spent the night in a lay by south of Woodbridge. He demonstrated great skill in manipulating the huge logs off the trailer; the barn owner observed that at one point the apex of the crane was within 15cm of the barn roof but both logs were quickly manoeuvred with pin point precision onto the waiting supports.

This was an occasion where practicality ruled out any attempt at Anglo-Saxon authenticity! Perhaps their log movements would have been more like the description of a nineteenth century timber delivery in this extract from Thomas Hardy’s The Woodlanders

The proud trunks were taken up from the silent spot which had known them through the buddings and sheddings of their growth for the foregoing hundred years; chained down like slaves to a heavy timber carriage with enormous red wheels, and four of the most powerful of Melbury’s horses were harnessed in front to draw them.

The horses wore their bells that day.  There were sixteen to the team, carried on a frame above each animal’s shoulders, and tuned to scale, so as to form two octaves, running from the highest note on the right or off-side of the leader to the lowest on the left or near-side of the shaft-horse.  Melbury was among the last to retain horse-bells in that neighbourhood; for, living at Little Hintock, where the lanes yet remained as narrow as before the days of turnpike roads, these sound-signals were still as useful to him and his neighbours as they had ever been in former times.  Much backing was saved in the course of a year by the warning notes they cast ahead; moreover, the tones of all the teams in the district being known to the carters of each, they could tell a long way off on a dark night whether they were about to encounter friends or strangers.