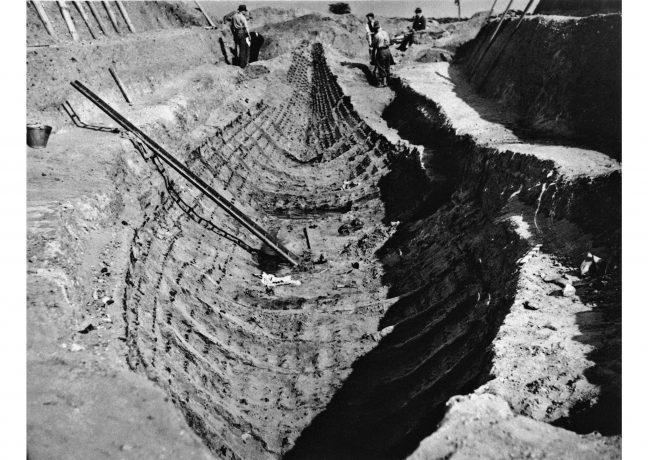 In the Ship’s Company we often calmly say that “our project to re-create the Sutton Hoo Mound One Ship is the biggest experimental archaeology project in the UK/Europe/the northern hemisphere/the world” just depending on how modest we are feeling.  But what are we talking about when we say that?

Many of you will know that as well as being a current Director of the Ship’s Company and Director of the third Sutton Hoo excavation, Professor Martin Carver is just a brilliant communicator.  And, admittedly, it was off the cuff in an unscripted interview for one of the SHSC films, but he has also given the most succinct definition of experimental archaeology that I have heard.  Martin said “we try things out to see if they work”.

A lot is implied in that simple statement.  Coates et al in the paper Experimental Boat and Ship Archaeology: Principles and Methods, state “….to learn more from [excavations] than is immediately obvious ….it is necessary to formulate hypotheses about past technologies, artefacts and cultures…. In Maritime Archaeology such experiments can take the form of building, on a full or reduced scale, models, or making other simulations of ancient boats or ships and testing them in repeatable sea trials, real or simulated.”

We have to try to build what the archaeologists found.  We can’t diverge from that – except where the data is flaky or for example the resulting boat wouldn’t float, or wouldn’t float the right way up.  And we need to have clear aims, that might be, as Professor Sean McGrail suggested  “to use authentic methods and materials to establish how an ancient craft was built and to estimate performance”. (Experimental boat archaeology some methodological considerations 1986)

That is what we are trying our best to achieve.  Of course the Anglo-Saxons didn’t build their vessels under electric light in a shed with a smooth concrete floor – and a dry shed with a hard floor is not always an advantage when working green oak with axes!

The photos below show examples of some of the tools that we are using – tools that would have been available to the Anglo-Saxons when they built the original ship.

For our project, what both saves us from blind alleys – but causes a lot of discussion in planning – is the incompleteness of the data.  The Ship cannot be re-excavated and we inevitably have to interpret the data in what is a limited record.

But we do have clear aims, stated superbly and succinctly later on in Martin’s interview:

“The construction is to be undertaken with the utmost circumspection and attention to detail.  Every action taken that relates to the materials, their assembly, and their adjustment in the ship’s structure is to be recorded so that a trail can be followed to and from every decision made by the shipwright and their advisors.

While no-one can today build an accurate representation of an ancient vessel, we propose to build an experimental craft informed by as much archeological information, previous experience, and science as we can muster.”

The data that we acquire about the implications and consequences of building such a large ship, and the feasibility of its performance on river, sea, and land [hauling between rivers] will move the collective knowledge on Anlgo-Saxon sea-faring from a level of weak generalisation to a new platform of likelihood.”

That is our grand aim.