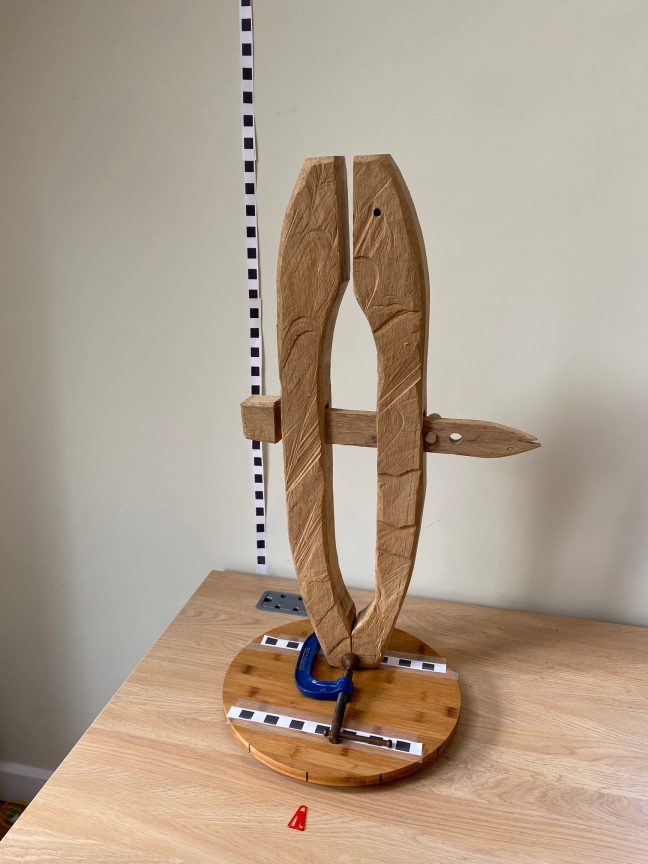 It is important for SHSC to have a scientific record of the components of the ship, as part of our experimental archaeology programme.  As things progress, we need to be able to look back at the materials we used and what we did. Photogrammetry is the science of creating a three dimensional model from a series of standard two dimensional photographs.  It is clearly the right thing for us to do.

What I have learned so far is that photogrammetry can be tricky!

I was already involved in The Ship’s Company as a volunteer, and as someone with an interest in photography starting off the photogrammetry project played to my strengths.  In an initial meeting a group of interested volunteers discussed the use of photogrammetry to create 3D models of the ship, its parts and the tools we would use in constructing it.  Subsequently we were kindly given access (by Felix Pedrotti of Southampton University) to some online tutorials  about using software and how to upload and convert the images into a 3D model.  I also did some research online and contacted Julian Whitewright for advice (there is a profile of Julian in the February 2021 newsletter).

Most people would choose to start with something relatively small that could be photographed under ideal conditions – like the clamp shown at the top of this post. However, we decided that the first photogrammetry project for the SHSC records should be the log that will form the keel of the ship. The keel log is 13 metres long and currently stored in a poorly lit barn.  Our project was no small task!

In January, fellow volunteer David Keeble and I made our first attempt to record the keel log and a second log that will be used for the stem and stern.  We had to decide on the section to be covered in each picture, and on how many to take down the length of the whole log.  There would need to be a large enough overlap in each picture so that the software creating the 3D image can work out how each picture sits in relation to the next – and from that build a 3D model.  Clever software!

We marked out locations about a metre apart with white tape down the length of each log , and about the same distance from the sides. We decided that three photographs would be needed at each location: close to the floor, about 75cm above the floor and looking down onto the log as close to vertically as possible.

The image below shows the plan that I sent Julian for advice on the angles we needed to cover. 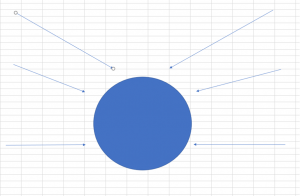 On Julian’s advice we set more locations for pictures to be taken from each end of the log that would help the software interpret the images.  So we marked 36 locations around each log and took three pictures from each one, starting off at the lower level and then going round the entire log again at the second and third heights.

The right levels of light are important so it was challenging at times – low light levels meant long exposures and in places we had to use extra lighting but too bright a light also causes problems. We ended up with 216 carefully taken photographs!

We sent all the images of to Julian to upload using the Agisoft computer programme at Southampton University.  But after all the our efforts the software couldn’t create a 3D model.  We needed even more pictures, especially at the ends and from the top.

So, we are going back to try again with more lights.  I will fix the lens on the camera so that the zoom doesn’t change and we will need to work out the maximum possible distance that we can get from the trunk where space is limited.  Hopefully second time lucky!

The photo below and video link show how well the technique can work.