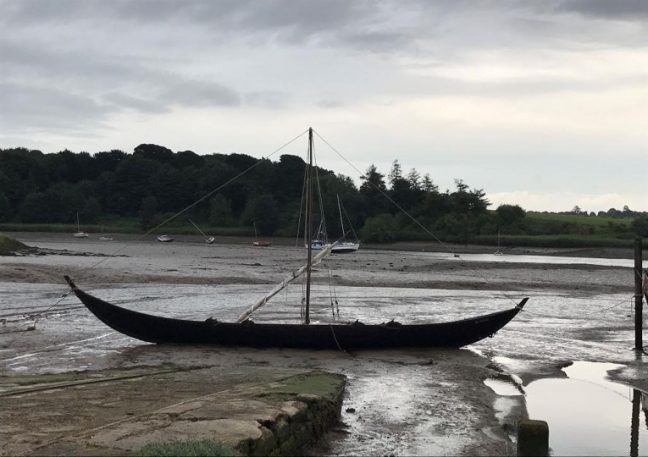 This is the fourth in Joe’s series of speculative posts – click here for links to parts 1, 2 and 3

Edwin Gifford built a half-length replica of the Sutton Hoo ship in 1993 – Sæ Wylfing (moored outside the Longshed in the photo above).  He was fed up with people saying that the shape of the hull meant that it could not sail in much the same way as the classic Viking ships.

He was not seeking authenticity in materials, building techniques, and so on, but he did take care over the shape of the hull. The weight of Sæ Wylfing is 675 kg. Crudely, you would then expect the full-size ship to weigh 2 x 2 x 2 = 8 times this, or nearly five and a half tonnes. The hull and the ribs of the reconstructed ship are indeed expected to come close to this, but the thwarts, other internal supports, and a deck will add further weight.  Actually we are expecting it to weigh in at about 9 tonnes.

And of course he rigged a mast, and a yard and a sail to go up it. 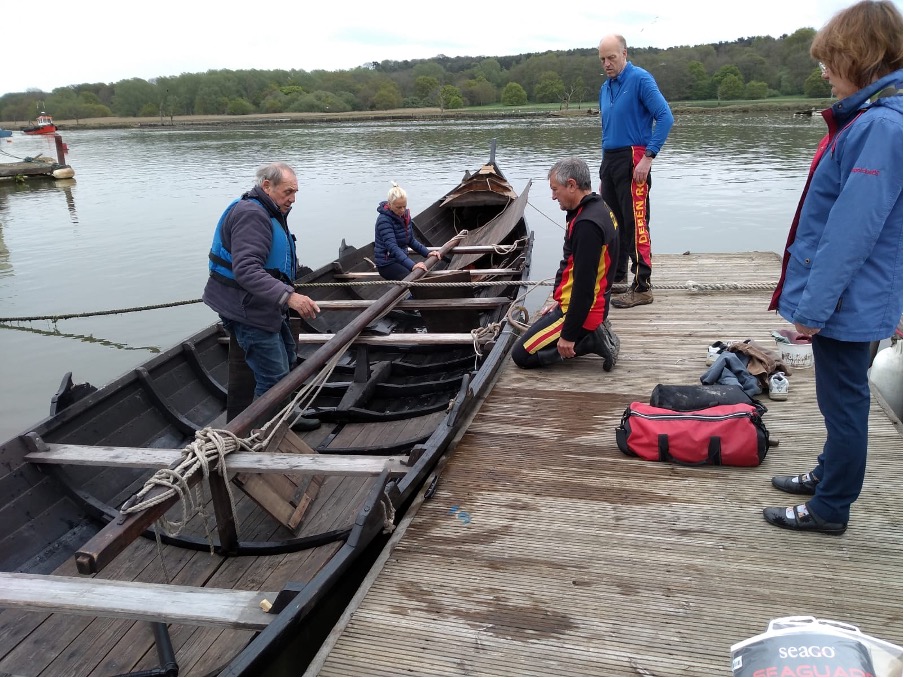 Gifford gave the central thwart a thicker support in the middle, and some reinforcement where the front of the mast pushed against it.  In the image below, down between the oars you can see a lengthways member, with a recess in it. This is called a keelson, and the hole is a mast step, where the bottom of the mast fits. The main force the mast exerts on the hull is downwards, and the job of the keelson is to distribute this. 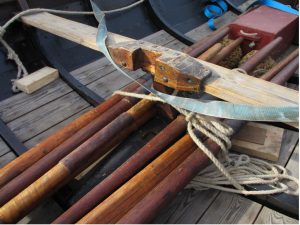 Gifford recounts some of the adventures he had in Sae Wylfing between 1993 and 1995. All the pictures show him at the helm, and I suspect this was always the case. He made some small additions to the keel in the winter of 1993/4. In 1994, when he was double-reefed in a wind gusting to 22 knots, he found he could make no progress to windward. He “decided to lower mast, first time afloat, and row.” This must have been terrifying. The dedication and composure of his crew was admirable.

His best result sailing to windward was at the Maldon Festival in 1995.

“…we covered three nautical miles direct to windward in 3.5 hours, despite many short tacks and loss of ground in crowded anchorages.”

This is just under one knot for ‘course made good’. For a land lubber that’s about one mile an hour.  And the effort of enforced tacks would have been a huge task for the crew.

The full-size reconstructed ship will be eight times as big as Sae Wylfing….Rowing (and paddling) it will be our priority. The first trials will be on the Deben; then the time will come to cross the bar and go out to sea.

When the trials in a seaway are complete, and the ship is much better understood, we can explore how the hull performs with a big sail and the wind from the side.