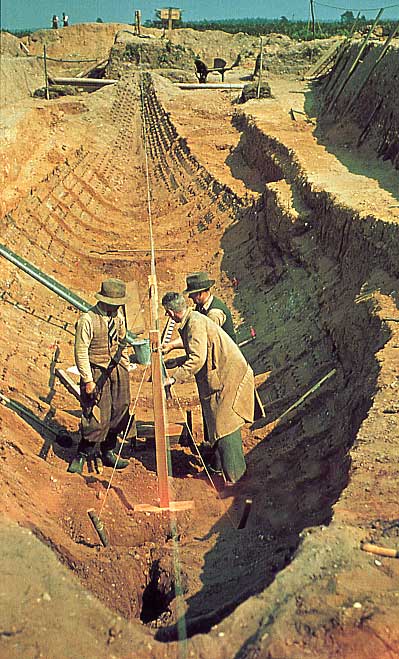 The film “The Dig” understandably focuses on the team Charles Phillips put together to handle the burial chamber and its contents.  It omits the team he organised to survey the ship.

Phillips first met Mrs Pretty, at Sutton Hoo, on 6 June 1939.  He made phone calls on her behalf to the British Museum and to the government (the Office of Works) that day.  The government formally asked him to take over the excavation project at the end of June.

The survey team was led by Lieut-Commander J K D Hutchison, aged 38, married with no children, the Keeper of the Department of Ship Models at the Science Museum and a retired naval officer.  His second, also from the museum, was A S Crosley, aged 45 or 46, with at least three daughters up to the age of 10.  Crosley was an active member of the Newcomen Society and presented a paper about the ship to them in 1943.  The other member of the team was young Frank Gillman.

Hutchison first visited the excavation site at Sutton Hoo on 12 July 1939,  the day before serious work began on the burial chamber.  After an inspection, he explained to Mrs Pretty what a survey of the ship would require, and she agreed to his proposals.  On the afternoon of Tuesday 8 August the team of three arrived and “…..orders were given in Woodbridge for the construction of the necessary wooden apparatus for the survey”.  This was one week after the work on the burial chamber had finished.

Mercie Lack and Barbara Wagstaff also arrived on 8 August. They were on holiday in the area.  Schoolmistresses and companions, were very capable photographers with good equipment.  They made an invaluable record and were among the last excavators to leave, on 25 August.

In his Newcomen Society paper, 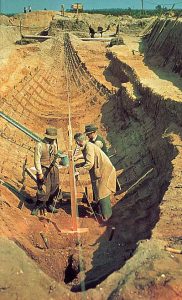 Crosley describes how the survey team measured the positions of certain rivets near each rib, relative to a datum line with plumb bobs hanging from it.  This was a laborious three-man operation.  Where that approach was not practicable, at the bow and stern, measurements and sketches were made from a bosun’s chair suspended above the excavation.  Southampton University used this data as the basis of research to derive the plan that SHSC are using to reconstruct the Ship.

Hutchison and Phillips seem to have got on well.  Hutchison took charge of most of the work at the site, while Phillips “was able to consider the problems of the ship at leisure and discuss them with Commander Hutchison”.

They pursued a number of investigations together – into the keel, for example, and how it connected to the stem and sternpost. 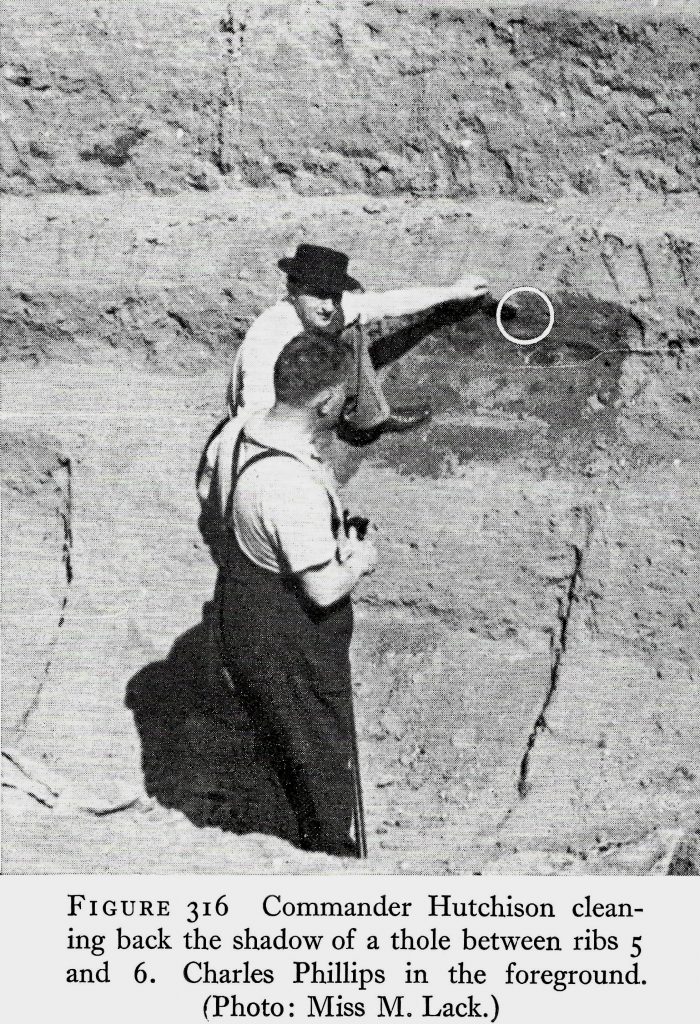 Hutchison’s signature can be seen on the legend for a tracing of the 1939 ‘provisional drawing’ done by Crosley – which can be seen in Ipswich Museum. 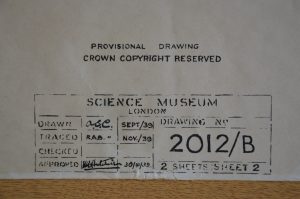 Hutchison died ‘of illness’ in July 1944.  He was Acting Commander of HMS President, which I believe was a training establishment on the lower Thames.  All his papers were burnt by his widow.

It was said that Crosley and Gillman did not like him.  Perhaps he was a hidebound officer who rather stood on ceremony.  At the end of his paper, Crosley says: “I thank the Director of the Science Museum for having allowed me to undertake this interesting survey and for permission to publish the results.  In making the survey I would like to put on record the valuable help given by my colleagues, Messrs. Gillman and [John] Jacob, who showed untiring energy under difficult conditions.”   There is a notable omission…