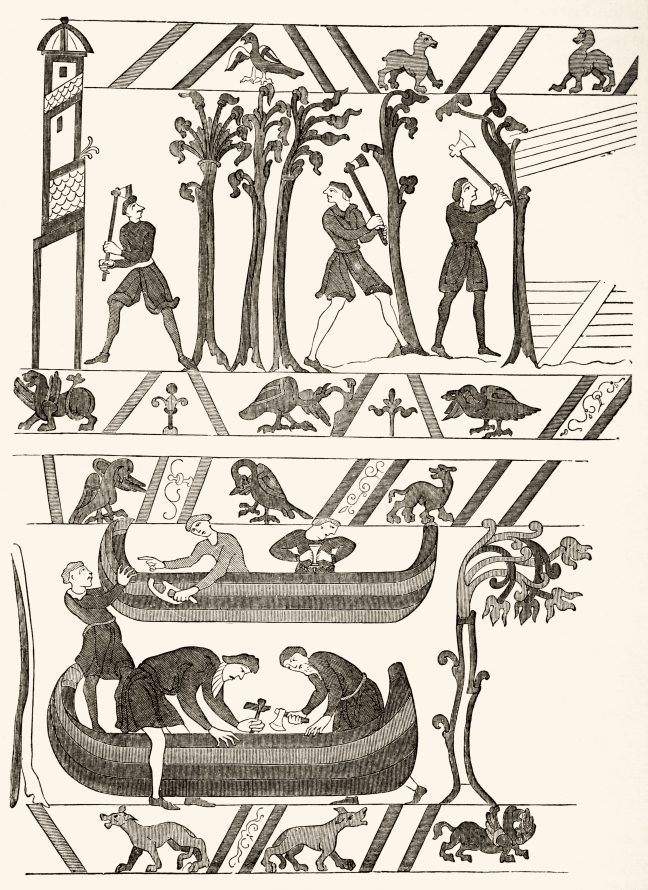 The Anglo Saxon ship that was buried at Sutton Hoo was of course made out of wood, a widely available, buoyant, and relatively easily worked substance that was the material of choice for ship-building from the earliest times right up until the beginning of the nineteenth century when traditional wooden hulls were gradually replaced with metal hulls, first iron and then steel.

That being the case, all ship-builders until that time, including the Anglo Saxon ship-builders responsible for building the ship that the Sutton Hoo Ship’s Company is reconstructing, had a close affinity with wood: they knew how to source it and how to work it.

So it’s not surprising to learn that Anglo Saxon woodworkers were called ‘treewrights’. This of course suggests strongly that they viewed the means by which trees were selected, felled, worked and turned into whatever was required as one continuous and interlinked series of activities and skills, a natural and organic form of vertical integration not commonly found in today’s timber industry. So the reconstruction of an Anglo Saxon ship inevitably involves rediscovering and learning from the Anglo Saxon artisanal mindset.

But what exactly were the tools the Anglo Saxon treewrights used for constructing the ship whose ghostly remains the Sutton Hoo Ship’s Company sets out to construct. And what did they look like?

Archaeological evidence from excavations and studies of worked timbers of the period suggests very strongly that the treewright’s tool of choice was the axe. We have axes too of course but do they resemble Anglo Saxon axes and if not, how do they differ?

Well, the answer is that broadly speaking, the Anglo Saxon ship-builders used two different types of axe, both with different uses and different shapes: the felling or chopping axe; and the T-shaped axe.

The Felling or Chopping Axe

As its name suggests, the purpose of the felling or chopping axe was twofold. First, it was used to fell the carefully selected trees that were the object of the treewright’s attention. Secondly, it was used for shaping: working the felled wood roughly into the shapes and objects required by the treewright.

The narrow, convex blade of the chopping axe lends itself to removing material quickly and to working on curved sections such as the frames and stems of a ship. So they were most likely used for carving the frames of the ship and the rough shaping of the keel, stems and planking.

The most well-documented examples of Anglo Saxon woodworking axes come from the excavations at Flixborough in Lincolnshire which took place between 1989 and 1991 (Figs 2 and 3 below).

Interestingly, contemporaneous representations of these felling or chopping axes can also be seen in the Bayeux Tapestry (see Fig 5 below).

T-shaped axes
It is likely that this type of axe was developed from T-shaped axes that were originally used as weapons. It’s a highly specialised tool used only for hewing out planks and smoothing the faces of timber: to get a really fine finish on the planking and flat keel sections, for example.

The T-shaped axe found in Hauxton, Cambridgeshire shown in Figure 4 will give you a good idea of what they looked like. 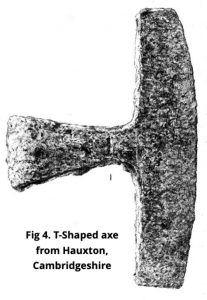 Again, representations of the T-shaped axe can also be seen in the Bayeux Tapestry (see Fig 5). 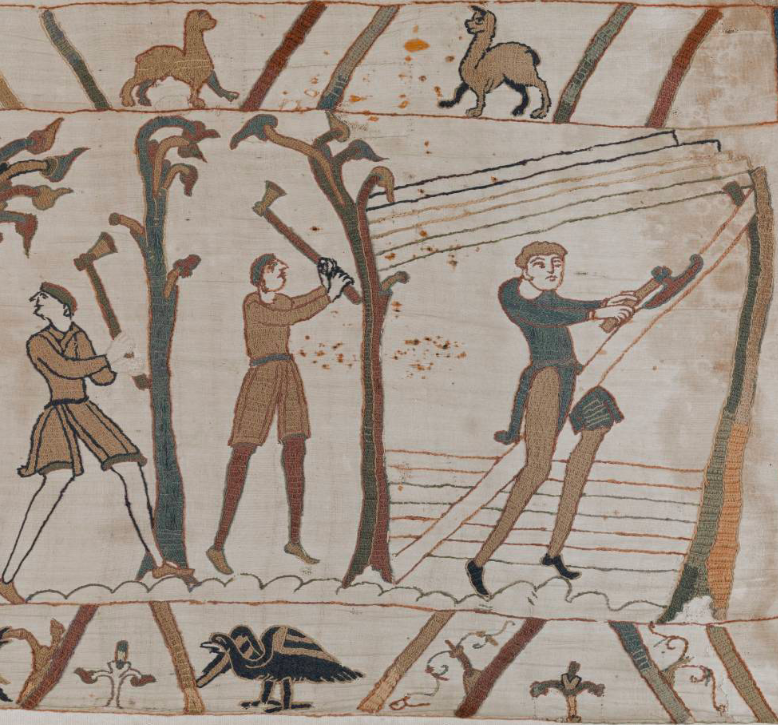 Use of axes in the Sutton Hoo Anglo Saxon ship reconstruction

The Sutton Hoo Ship’s Company sets out to make sure that the Anglo Saxon ship that’s being reconstructed in the Longshed at Woodbridge is built as accurately and authentically as possible; and using, as far as possible, replicas or likenesses of the tools with which it would originally have been built.

It’s accepted of course that for pragmatic reasons, compromises inevitably have to be made. For, example, the two trees which were selected in Wiltshire for the keel, and which are now being worked in the Longshed in Woodbridge, were felled using chainsaws. And they were not of course transported to the Longshed by Anglo Saxon methods.

But the Longshed ship-building team is already using T-shaped finishing axes made by blacksmith Alex Pole whose design is based on examples from the Bayeux Tapestry (Fig 6) as well as modern Gransfors Bruks forest axes, one of the closest modern equivalents to the Anglo Saxon felling axe that can be found (Fig 7).

Similarly, they are also using a replica axe which is based on the felling and chopping axes found in the Nydam and Flixborough excavations mentioned above (Fig 8).

Even more impressively, the team is also using a T-shaped finishing axe, based on 6th and 8th century examples from Tuddenham, Suffolk and Hauxton, Cambridgeshire respectively, with a wrought iron body and a forge-welded steel bit made by blacksmith Hector Cole from recycled mediaeval iron (Fig 9).

So there you have it. Construction work has started in earnest using as far as is achievable the methods and tools similar to those that the original ship-builders would have used.

We’ll keep you posted with more news as this exciting and important reconstructive archaeology project moves inexorably forward to the slipway and flotation!