The Sutton Hoo ship is generally regarded as having a ‘plank’ keel. The British Museum suggestion for the cross-section in the middle of the keel published in 1975, is in the image above.

It’s broader than it’s deep, and the same goes for the projection of the keel below the bottom of the ship.

A clinker ship has rows of planking on each side, called ‘strakes’. These can be numbered, starting at the bottom. A plank keel is essentially ‘strake zero’, and its contribution to the strength of the hull arises from being part of an integral shell.

Later Viking ships tended towards a ‘beam’ keel, not so wide, but deeper. This provided additional longitudinal stiffness, and countered hogging and sagging along the length of the ship. The projection below the bottom of the hull was also deeper, which helped the ship to resist the wind pushing sideways across the water when sailing. The Vikings still valued a shallow draught, but the beam keel was a key step in the way their ships evolved.

The Oseberg ship, early Viking, was built around AD 800. Here is a section, from Vibeke Bischoff:

I don’t know anyone who really believes the Sutton Hoo ship had a beam keel. But the lack of evidence from underneath the ship makes it difficult to rule this out completely.

One niggling piece of context is the keel of the Kvalsund 1 ship. It has the characteristics of a ‘thin beam’. Generally dated around AD 690, this is less than one hundred years after the AD 600 date usually suggested for Sutton Hoo.

Remains and models can be seen in the Historical Museum in Bergen. The piece of wood bottom left is part of the keel: 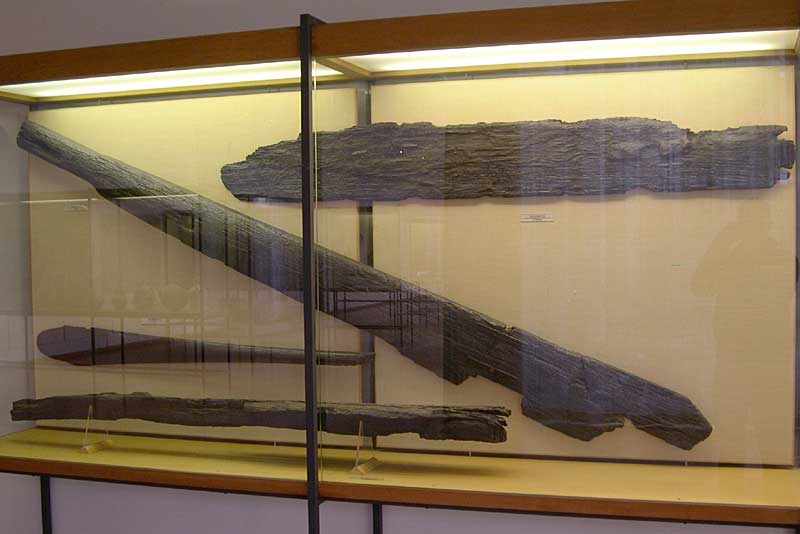 However, a recent paper by Nordeide, Bonde and Thun re-examines the tree-ring analysis of the wood from the Kvalsund ships. It moves their dates about one hundred years forward, to around AD 790. This is now early Viking and scarcely different from the time of the Oseberg ship.

Should this affect my view of the likelihood of a beam keel for Sutton Hoo? Psychologically, I am swayed. It does seem to reduce it further. But am I being epistemologically naïve? What really counts when using data to try and extend knowledge? Why should the weakening of one tentative parallel piece of information really make any logical difference?

A way out of this sort of situation is sometimes ‘ask Damian’.  Dr Damian Goodburn, little expecting to be quoted, replied:

“…The first beam form keels  seen in NW European waters were used in Roman Mediterranean style  sailing vessels.  These ventured into the North Sea which also bordered SW Scandinavia.  Some Scandinavians also seem to have served as mercenaries in the Roman empire or at least their near neighbours just to the south did.  And of course we have the Varangian guard etc. in the eastern Roman empire…..  So unless the practical sea folk kept their eyes closed they would have seen beam form keels….  So not adopting them must have been related to practical needs, such as hauling out etc but rowing requirements must have been a dominant factor, I would guess.   Only one of the late Saxon period keel timbers found reused in London, had a beam-like form, so presumably by then they were not considered a central feature of regional clinker boat building.