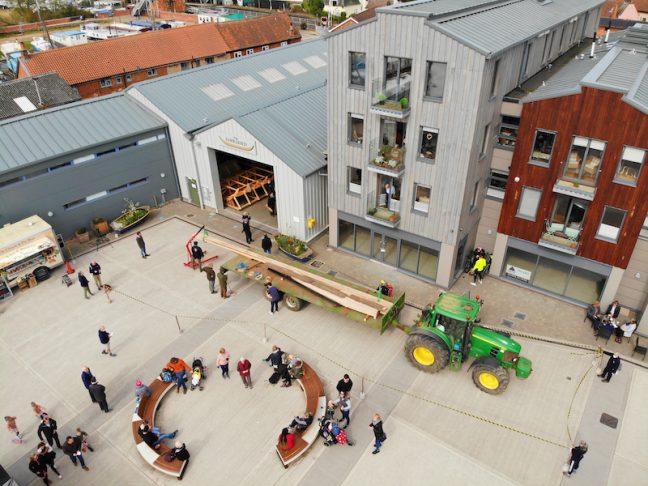 On Sunday 18 April the volunteer crew took transported the pieces of keel blank that have been fashioned out of the tress from Forestry England ready to start work on Monday.

It was ‘all hands to the pump’ to manoeuvre the enormous pieces of timber onto the waiting trestles where they will be worked into shape using traditional axes. 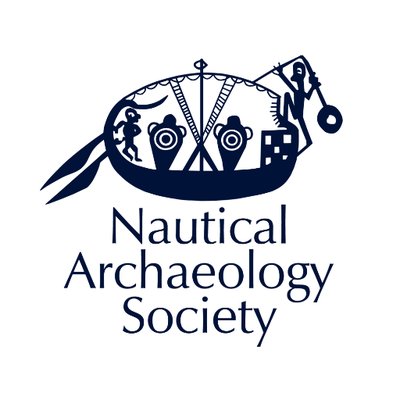 Whilst on maternity leave, NAS Education Manager Peta Knott, from the Nautical Archaeology Society, is taking a break from work and enjoying the many archaeological lectures, workshops and most recently – movies – that are currently available online.

Here she reviews ‘The Dig’

The Society are keen followers of our project and we thank them for their continued support. 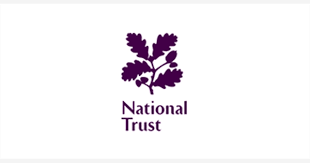 In this article written by Erin Blakemore for the National Geographic, the author explores whether or not the Sutton Hoo Ship was the last of its kind…

‘Archaeologists can be a careful bunch. They hedge their bets, question the data at every turn, and tend to spurn any hint of sensationalism. But bring up the ancient burial mounds of Sutton Hoo in southeast England, and even the most circumspect scholar will spout superlatives. Magnificent! Monumental! Unparalleled! .. read on 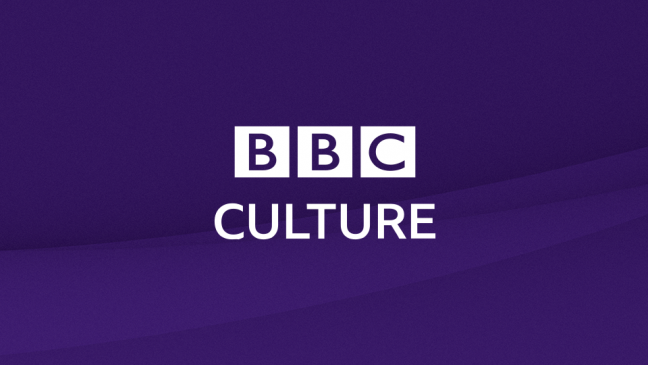 The BBC has put together an interesting culture article called The buried ship found on an English estate that pieces together the archeological dig, the burial site, and the new Netflix film, The Dig.

Towards the end of the article they write ‘And what exactly was the nature of the vessel? Was it a warship or more of a ship of state – a 7th-century Britannia? We may be in a better position to judge when a project to build a working full-size replica of the ship comes to fruition. It will give us a far better idea, for example, of exactly how it handles on the water. The Sutton Hoo Ship’s Company aims to have its vessel built and ready to begin trials in three years, and hopes that The Dig will generate more interest in its undertaking.’

Read the full article and let us know what you think contact@saxonship.org 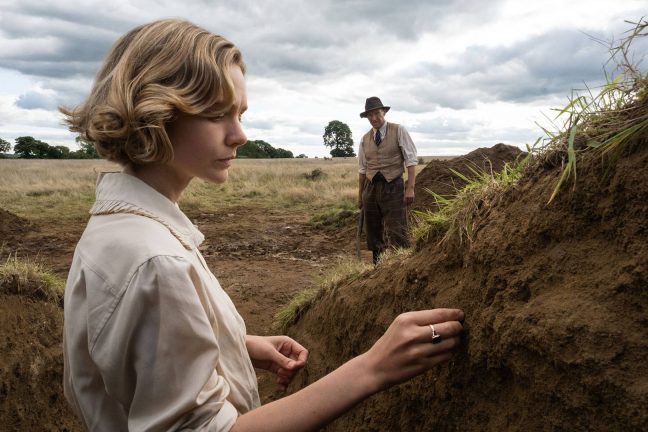 THE DIG starring Carey Mulligan and Ralph Fiennes is being released at the end of this month on Netflix. The film, inspired by the book written by John Preston, captures the period of the Sutton Hoo Ship discovery. Once you have seen the film you can begin to imagine what our replica ship will look like and the impact it will make.

We were very lucky to have been remembered by Jules Hudson, from Escape to the Country, as he was filming a potential house move in this area and wanted to record some local places of interest. Where better than an historic project in the making, in the centre of Woodbridge.

During the day Jules captured an interview with Philip Leech, the chair of our board, and did some filming with Jacq Barnard our Project Manager who explained the importance of the models that are being made and provided a practical demonstration of how the ship might have been rowed. Jules was extremely interested and promises to return to a follow up shoot when we are further along.

Below you can see the crew setting things up explaining why so many takes are necessary to put a good short film together. The episode will be televised sometime in the next 6-18 months, so we are looking forward to seeing the final cut. 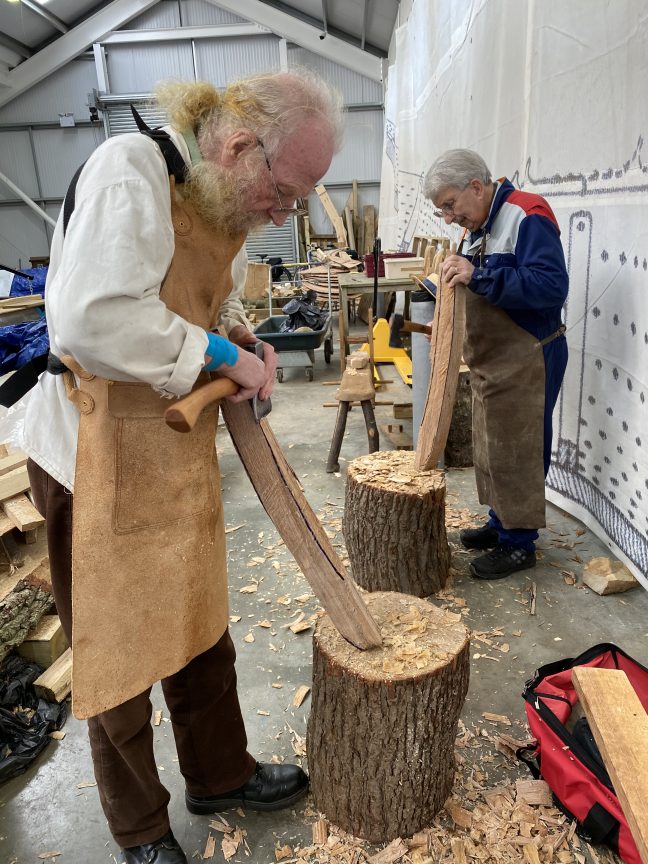 The first open day of 2020 saw a steady stream of very interested visitors. Luckily the weather was in our favour for once and the bright sunny afternoon encouraged people to break from their river walk to come and see what all the noise was.

The Crew Members demonstrated how to split willow into blanks ready for making trennails, these are the wooden plugs used to fasten different sections of wood together. Visitors were encouraged to handle the split wood to see how wet it was in its green state compared to some of the completed examples which were much lighter in weight and completely dry. Work also continued on the 1:5 scale model which will eventually be used for taking measurements for the main ship build. Volunteer stewards and Directors escorted small groups along the viewing area explaining how the project is progressing and encouraging people to be part of the history by sponsoring their own rivet (see sponsorship section of website).

Some people visiting the Longshed today were so enthralled that they have already completed a volunteer application to help with the ship build, creating wooden souvenirs from the oak offcuts and to help with some of the back office administration. If you would like to volunteer please complete this simple form and we will get in touch with you as soon as possible.

The photographs below show volunteers splitting wood, crafting wooden clamps and working on the 1:5 model.

The next Open Day will be on the 11 April  – everyone is welcome! 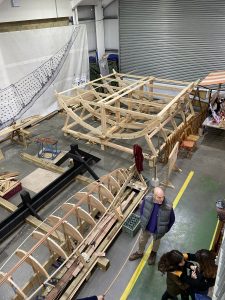 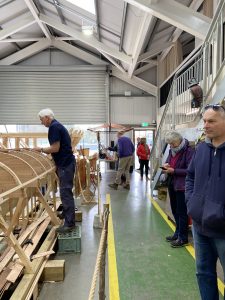 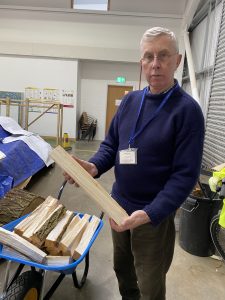 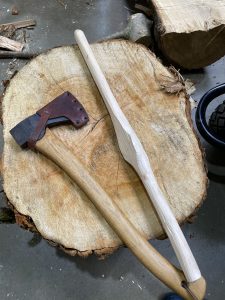 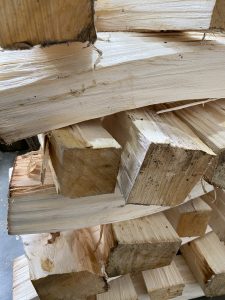 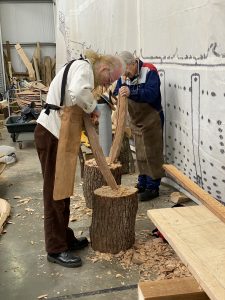 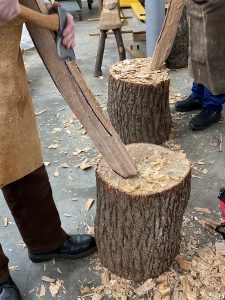 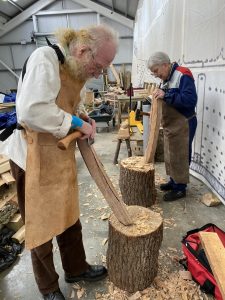 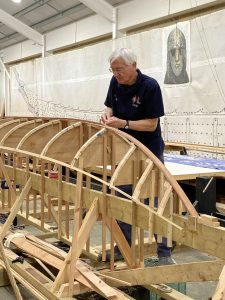 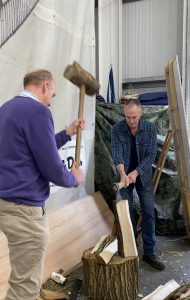 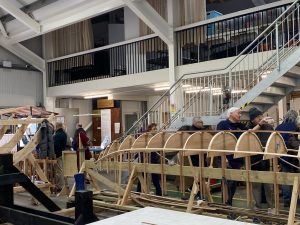 Today a group of Ship’s Co. Volunteer Crew Members travelled over to Sicklesmere near Bury St Edmunds to collect four Ash trees. These four trees are the last available Ash from the Bradfield Woods as the remaining Ash trees have sadly succumbed to Ash dieback.

The Ash trees are lovely and straight making them perfect for oar making.

The Sutton Hoo Ship’s Company would like to formally thank The Suffolk Wildlife Trust for their kind donation.