August has been a busy month and it has really begun to feel that we are back in business and progressing the build of the Ship on all fronts. This report aims to bring you up-to-date with the progress made so far.  A number of volunteers have returned to the Longshed, with more to come, and we have welcomed some new and younger volunteers to help with the heavy work which will be ongoing for the next year or so.

The keel has been completed with axe finishes on all surfaces and to the scarfs. Unfortunately, but as expected, the aftermost three feet had to be removed due to a large knot (from the lowest branch of the canopy) as there was too much risk of this causing a weakness in the finished ship if it had been allowed to remain. Fortunately, this possibility was recognised early on and the log sourced in May (from Somerscales Timber) for the aft underloute had enough length to compensate for this shortening of the keel. The three-foot piece will not go to waste as we plan to set thin cross-sections of it into resin to be purchased by a few lucky collectors.

The keel has been placed on the strongback in what was a surprisingly easy manual lifting process and all of the station lines matched up nicely. The keel has now been strapped down to the strongback to encourage it to take up the irregular curve required.

The station molds were made during the Spring and are now being painted black before being erected on the keel and braced up. This painting of the molds – whilst not usual in modern boatbuilding – will enable them to be digitally removed from photographs allowing an ongoing photographic and video record to be made of the ship in-build without the encumbrance of temporary parts which will be subsequently removed. This will form an important part of the recording process and eventual publication of the ship-build.

Work has continued on the Underloutes. These pieces will make up the extra length we were not able to find in a single-length log for the keel. We are informed by Dr Damian Goodburn that this became standard practise in later medieval times as ships grew bigger and timber stocks declined – indeed, Volume 1 of ‘The Sutton Hoo Ship Burial’ suggests that a multi-part keel may have been utilised on the Sutton Hoo Ship, but the forced pace of the original excavation and subsequent damage to the imprint during and after the war made it impossible to find much detail of the composition of the keel arrangement.

The bow underloute (along with the lower stem) was sawn out of the curved log received from Swindon at the beginning of this year. It was hoped that we might get both underloutes out of this log, but the unusual growth effect appears to have resulted in a large amount of sapwood – possibly as a defence mechanism – and precluded this.

Once sawn, the lower stem section was turned through 180 degrees to form the upward thrust of the stem. An upper section of the stem will, in time, be fastened to this section.

The plank bevels on the underloute and the ‘rabbet’ (rebate) in the stem have been cut with chisels. As a counter to this, the stern underloute is being worked totally with traditional techniques (apart from the use of plywood patterns to ensure accuracy of profile – the Anglo-Saxons would probably have done this by eye, or possibly some now lost ‘rule of thumb’ regarding the required profile), which will give a direct comparison of the relative working time of each method. This work entails cutting notches in each face of the log and then removing the timber between to give a flat surface. The plank bevels can then be applied using fine axe-work and possibly chisels (examples of AS chisels do exist, but it is not known to what extent these were used in shipbuilding).

The early commencement of the harvest this year has meant that we needed to vacate the barn at our second site outside of Woodbridge but not before our first axe training course enabled us to begin converting the lower half of the keel log into planking. This again requires the notching out of the previously cleaved segments of timber, before finishing to the finished thickness of one inch. With the keel on the strongback, it has been possible to bring these down to the Longshed to finish, along with some lengths of lime and sycamore from woodland at Pettistree to use as props and bracing for the molds as we begin to set these up. 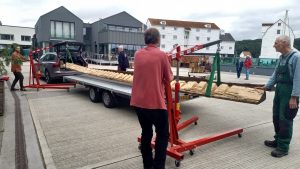 We have also been searching for the next logs needed for the planking of the ship. With nine strakes (runs of planking) per side and each strake being made up of four, five or six pieces of timber, that equates to nearly ninety pieces of planking to be made (more like one hundred with spares and damages). Thanks to the good offices of volunteer Richard Symes we have been put in touch with most of the large farmers and major landowners in Suffolk and the surrounding counties. This has so far led to the promise of four logs – probably half of the total requirement. The first of these has now been delivered, and (along with a shorter log obtained from Somerscales at the same time as the underloute timber) will be cleaved and converted – either as a part of our next Axe Safety training course or possibly as demonstrations at Sutton Hoo.

Research for the project continues behind the scenes with many papers now either published on the website or in ‘peer review’ for future publication. These include papers on tools, rope-making, Anglo-Saxon ships, navigation and anchors.

Several people who have sponsored the project, either through timber donations or through the last Crowdfunder, have been able to visit the Longshed to view our progress. As have different groups of enthusiasts who have contacted us. Media interest continues to grow with both film crews and journalists coming along for fact-finding tours before publishing articles and producing programme segments.

Finally, as we delve deeper into the mysteries of Anglo-Saxon shipbuilding, we continue to gain insights and fresh interpretations of the impression found in the sandy soil at Sutton Hoo over eighty years ago. Not just about the tremendous resources and skill levels both needed and available fourteen hundred years ago, but about ourselves and how this wonderful project affects both us and the people who come to look at this magnificent ship being brought to life.

We look forward to seeing more of you – volunteers and visitors alike – as we go forward.