There have been a number of times during the build so far where the modern techniques we would usually use in boatbuilding today do not appear to fit the construction of a seventh Century ship; sometimes, as in the use of temporary molds, we have utilised the modern method for a specific reason – in the case of the molds to ensure the accuracy of the build. In others, we have needed to examine and understand the historic techniques. One of these has been the setting out of the plank widths on the molds. In a modern build of a vessel with ‘moderate’ sections (easy curves, no reverse curves, etc.), planks might be of the same width throughout planking (or varied slightly at the turn of the bilge). In the Sutton Hoo ship, these plank widths vary throughout the ship. We have modelled this at 1:5 scale, but well into the build of this model, we found out that the plank runs, as designed, did not really match the photographic evidence from the excavation.

We also found, for other reasons, that the model was oversized (this was nothing to do with a builders error!). This has given us the problem of trying to fit specific plank widths up to each of the seventeen temporary molds which act as frames whilst we plank the Ship.

Another such area has been the method by which the overlapping ‘clinker’ planking transitions to a single, side-by-side ‘carvel’ planking at the ends of each strake – the “hood-ends”. In a modern build, this transition would often occur over a short length as the strake runs into an angled stem or sternpost. With our Ship, this transition occurs over a much longer, curving length of planking. After unsuccessfully trying a number of methods in softwood we tried the method described and drawn by Eric Mckee as being in the Graveney Boat.

The Graveney boat was excavated in 1967 and was an Anglo-Saxon trading ship found under the North Kent marshes – excellently described by Valerie Fenwick in “The Graveney Boat: a Tenth-Century find from Kent”.  As the sketch shows, in this layout, the lower plank is cut off square where it crosses the ‘rabbet’. The upper plank then is cut to fit over this. This method can be readily cut with traditional tools and is a simple and elegant solution to a complicated joint which needs to be watertight (this is also aided by the long sweep to the planking which brings the joint above the level of the waterline).

The Vikings latterly largely eliminated this complicated joint by building a solid, carved stem section to which the planking was fastened by simple scarf joints.

With these trials, we have been able to resolve some complicated issues for which we do not have direct or complete evidence from archaeology. However, this has taken considerable time and effort and has meant that the fastening of planking to the Ship has not yet commenced.

The latest cleaved log has been delivered into the Longshed which means that further planking stock can be made ready for fitting and fastening. 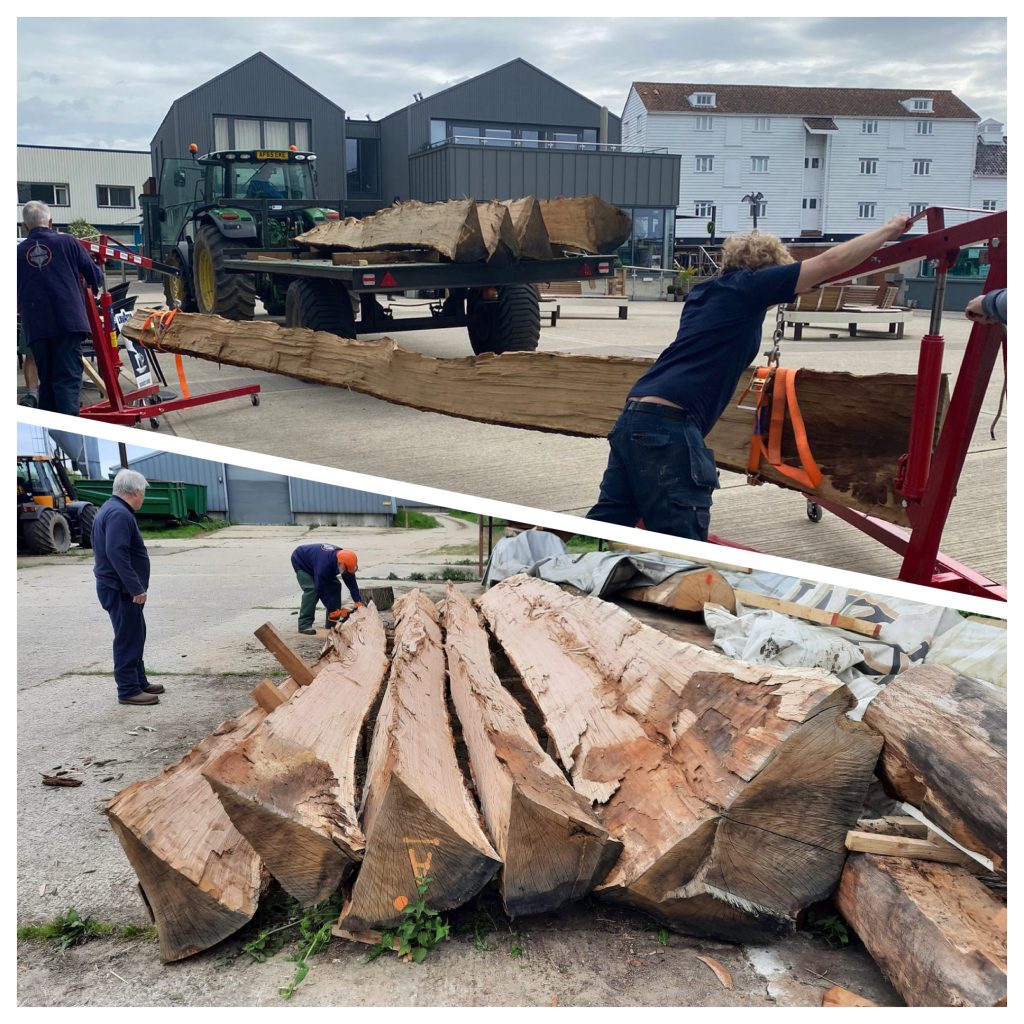 Many other small items, not directly applicable to the ship-build have been worked on or completed, including mounts for camera locations, modifications to our new shop unit, a quirky tree-stump collecting box and new trestles.

The search for timber for a replacement underloute continues. Many of our local sources have been revisited along with some new ones and a social media campaign was developed to widen the search. The timber for this part is very specific and we are now considering how long we can wait to find the right piece before we consider repairing the existing piece rather than replacing it.