If you look into the river end door of the Longshed you will see a very different view to that seen this time last month, and it might seem that a great deal of progress has been made. However, this is typical of boatbuilding where months of preparation might be required and then, all of a sudden, a major step forwards seem to be taken.

This change is because we have started erecting the temporary molds onto the keel and for the first time we can begin to see the impressive shape of the full-size ship emerging. As I wrote last month, these molds were made in the six months leading to Spring and are being used as temporary frames to accurately maintain the shape of the Ship whilst the planking is fixed, and the permanent frames are attached. 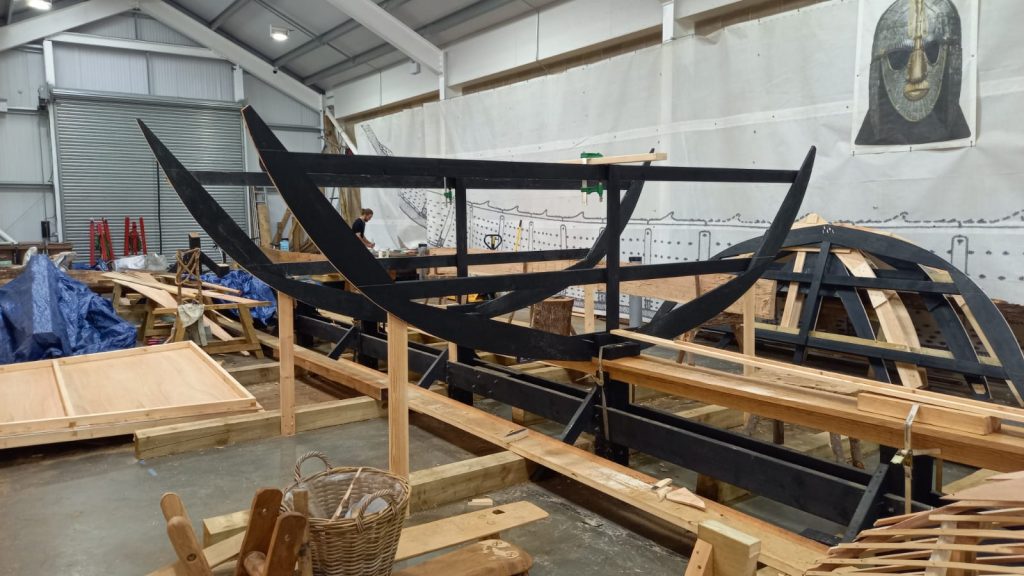 This is not strictly prototypical – it is believed that the Anglo-Saxons would have built the ship entirely by eye using the experience of the shipwright. This would have relied on the bevels applied to the outside of each plank to control the angle of each plank. However, it is possible that a single control mold was used in the middle of the ship to give the basic idea of the required shape, but it is generally accepted that this technique did not come into use until much later. 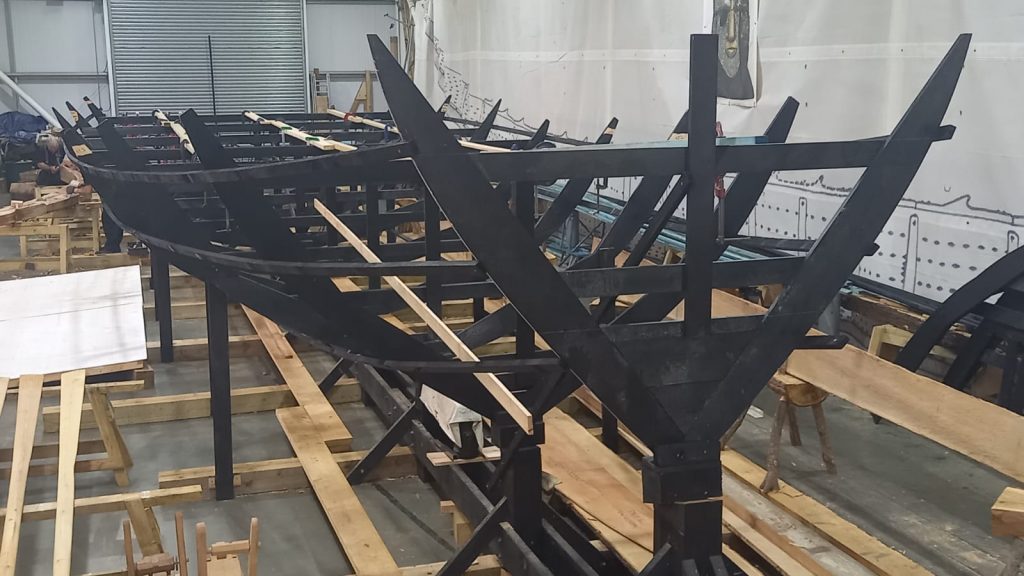 We have chosen to use this more modern technique as it will enable a much more accurate representation of the archaeological excavation to be built and then trialled at sea, hopefully giving more accurate results regarding the performance of the Ship.

As can be seen from the digital ship shown in our promotional video that the full-size ship will take up almost the full length of the Longshed and so a lot of manoeuvring and moving of models, timber and equipment has been required to make this happen. The 1:5 scale model has been temporarily moved into the workshop area. Once “Whisper” leaves (the second St. Ayles Skiff for the Woodbridge Coastal Rowing Club which is almost built), then the model will take up her current position. The midships model has been split in half and moved to the Western (railway) end of the shed. This will require frequent movement, both to complete its own planking and for use as a biomechanics research platform to investigate the layout and internal structure of the Ship. Don’t worry this model was designed and constructed as two halves so it can always be put back together.

The Support Crew have been busy painting the molds and the ribbands (battens which will be placed at the locations of the plank edges to ensure fair planking runs) black so that they can be digitally removed from photographs enabling just the Ship to be seen to grow and develop in future videos and for measurement purposes. It is also much easier when showing people around to say that anything black will not be part of the final ship.

The Underloutes (extensions to the keel section beginning the curved transition into the stem- and stern-posts) continue to be worked on and are nearing completion. They will then be set up and attached to the keel allowing for the remainder of the molds to be set up and the whole structure braced and trued up.

Two more logs have been sourced for planking and are soon to be delivered along with another curved timber for the sternpost.

Then the long process of cleaving and converting these will begin and the planking process commences – this is likely to take around nine months, interspersed with fitting the floors (centreline framing) and lower framing into the ship.

Its been a very productive month for which we are enormously grateful to all of our volunteers.