As we move into Autumn, we continue to gather the resources necessary for the build to continue through the winter months. A new batch of nails and roves has arrived from Alex Pole Ironworks (thank you Alex!) and the trees from Hainault Ancient Forest have been delivered (see below). We hope soon to be felling timber for planking at a site in Norfolk and we are acquiring caulking materials prior to fitting the first rivets to the hull planking.

On 20th September we travelled to Hainault Ancient Forest in Essex to see trees for the replacement underloute timber and framing of the Ship felled.

These trees were viewed by Jacq Barnard (Project Manager) and I in the Summer (see June 2022 Newsletter) and after surveys to check for bird and bat occupation (or rather the lack of occupation) and for the absence of the oak processionary moth, these were felled and delivered to the Longshed. Many thanks are due to Jonathan Jukes and all at the Woodland Trust for this very kind donation.

Mick and Stuart Dunn (M.J. Dunn and Sons) felled and delivered the logs. It is fascinating to see how easily modern hydraulics handle the movement of these large logs – the largest is 6m long and weighs 1.85 tonnes – and to think of the comparisons with how the Anglo-axons might have moved them fourteen hundred years ago.

The following day, Jacq and I travelled to Crowborough in East Sussex to view more potential timber for both planking and framing. It was a beautiful woodland and hopefully, there will be more news on these timbers in the near future.

In our absence, No.2 Shipwright Laurie Walker and the volunteers set up the underloute log, stripped off the bark and marked it out prior to commencing work to cut flats onto the two sides of the log. This is the first stage in converting the log into timber to replace the damaged stern underloute (the extension to the keel which will fit between the keel and the sternpost). The complete process of conversion is expected to take around 360 hours and is being filmed in time-lapse for recording purposes and for future inclusion on our YouTube channel. 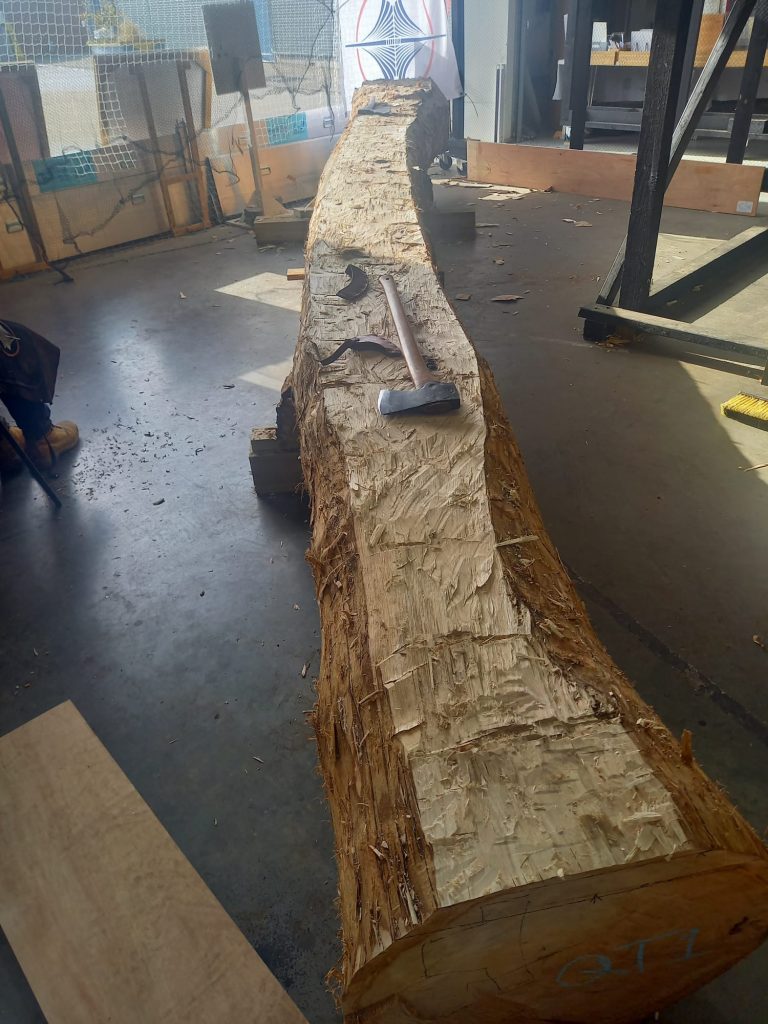 We will need to take care of the use and seasoning of this freshly felled log in order that we do not encounter splitting again as it dries.

We have re-commenced work on the full-size ‘midships model’ of the Ship. 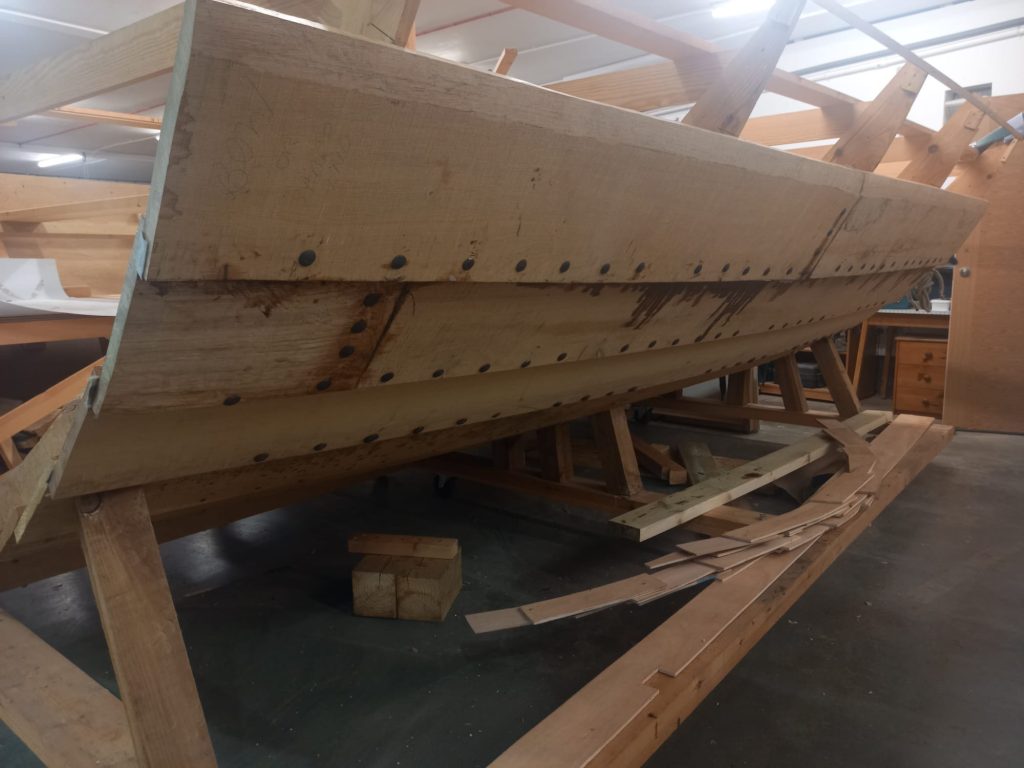 This effectively comprises the forward half of the burial chamber and is used as both as a training and a design tool. It is the intention that volunteers will fit a plank to this model before they fit a plank to the Ship proper so that we can develop and maintain a high level of knowledge and quality amongst the Production Crew. In design terms, it has again thrown up a major question about how the Ship was originally built. In Volume 1 of the ‘The Sutton Hoo Ship Burial,’ it is suggested that the sheer strake (the top run of planking, to which the ‘tholes’ (think rowlock!) are fitted) could be up to three inches or 7.5 cm thick. This is to ensure enough thickness for securing the ‘tholepins’ (or ‘gunwale spikes’), “up to seven-inch-long iron nails, thought to be approximately one inch thick” (Care Evans and Bruce-Mitford, 1975:398).

Bruce-Mitford suggests that the sheerstrake (which he calls the ‘Gunwale Strake’) might be three inches/ 7.5 cm thick at its upper edge and to which the tholes are nailed, but it must taper to just one inch/2.5 cm thick at the bottom edge because the plank nails are all two inches between the head and the rove – meaning that the plank is one inch thick/2.5 cm at this lower edge. Our small section of timber cannot be bent around the necessary curve at this thickness, and it is doubtful that a longer section would be able to be either. 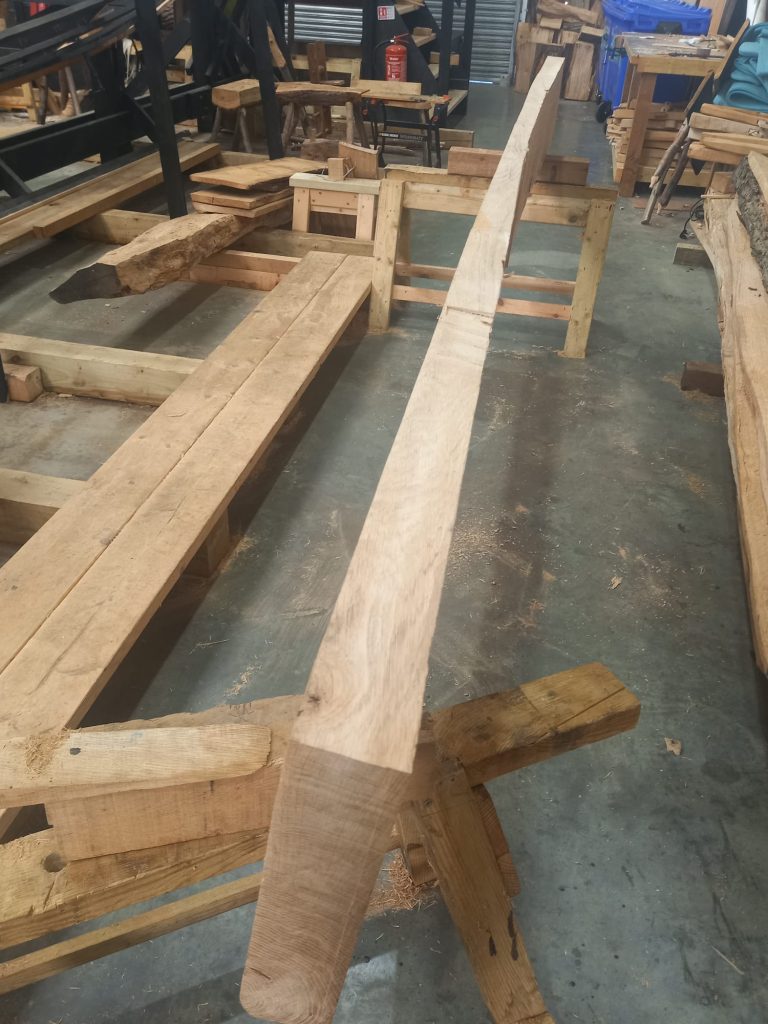 To work around this on the model we have cut a curve into the section and will fasten another piece to the outside of this to make up the thickness, but we will not be able to do this on the Ship herself; this would defeat the object of the thicker plank. Consequently, we will have to experiment with different plank thicknesses and spike sizes before settling on a specification for the Ship and this is again indicative of the basic research that we are having to undertake to build the Ship.

The 1:5 scale model of the Ship has now completed its planking phase and we can see the full shape of the hull, not just in skeleton form. 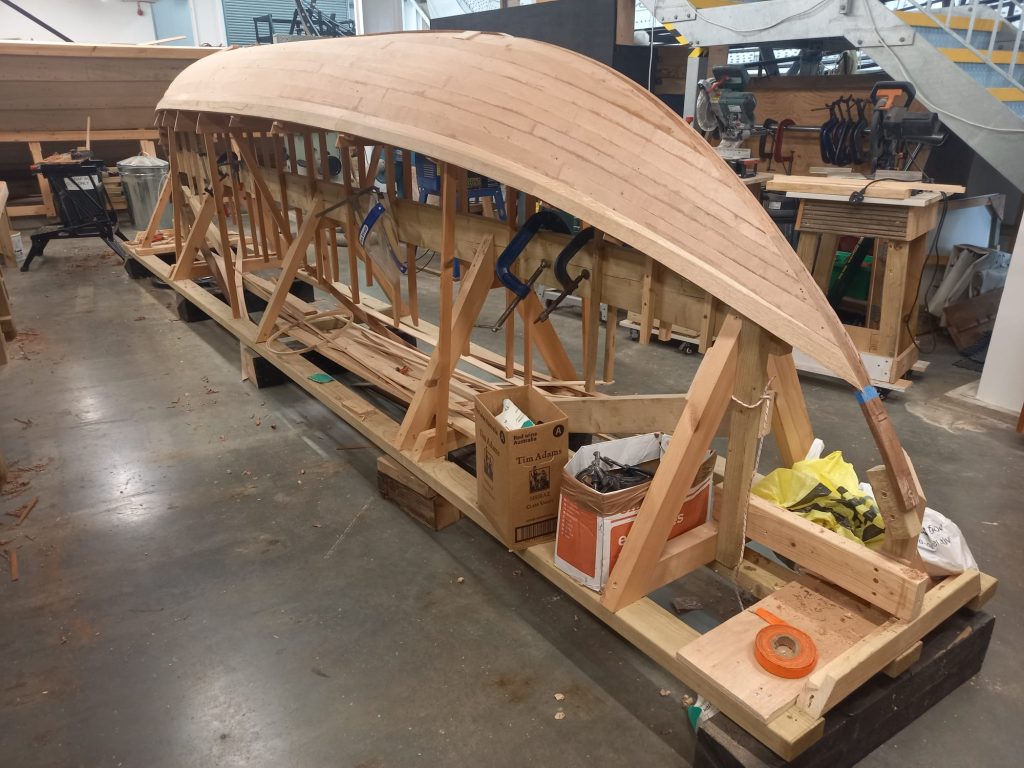 Final finishing of the outer stems and cleaning up of the planking is now being carried out, prior to the hull being removed from the mold and turned the right way up. The fitting of the frames will then commence.

We also had a lovely visit from the 5th Woodbridge Sea Scouts who were very helpful in clearing up the day’s wood chippings. More of this is below.