Saxon ship that inspired Netflix film ‘The Dig’ to sail again as restorers rebuild it from scratch.

The Sutton Hoo longship, one of Britain’s greatest archaeological treasures, is being carefully brought back to life in a Suffolk shed

Once the replica of the Sutton Hoo is built it will be put through its paces on the River Deben, which runs close to the burial site CREDIT: Heathcliff O’Malley /The Telegraph 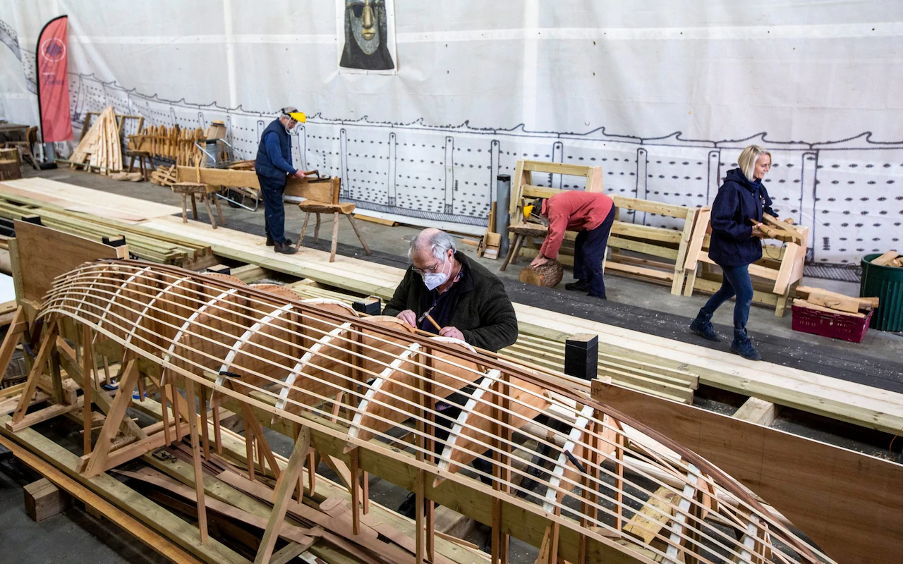 A Saxon ship that inspired the new Netflix film The Dig is set to sail again after restorers began rebuilding it from scratch using tools that our predecessors would have used.

The Sutton Hoo longship, one of Britain’s greatest archaeological treasures, is being carefully brought back to life in a Suffolk shed after it was buried 1,400 years ago.
It comes ahead of the release of The Dig this week, a movie about its discovery starring Ralph Fiennes as a self-taught archaeologist and Carey Mulligan as the landowner, is released on Netflix.
Treasures from the original excavation including a unique Anglo Saxon helmet, weapons and ornate gold and garnet fittings are among the most popular exhibits in the British Museum.
The original excavation of the burial mound near the riverside town of Woodbridge took place in the months before the start of the Second World War as clouds gathered over Europe.
Basil Brown, played by Fiennes, was asked by Edith Pretty, played by Mulligan, to investigate the mysterious hillocks on her estate. 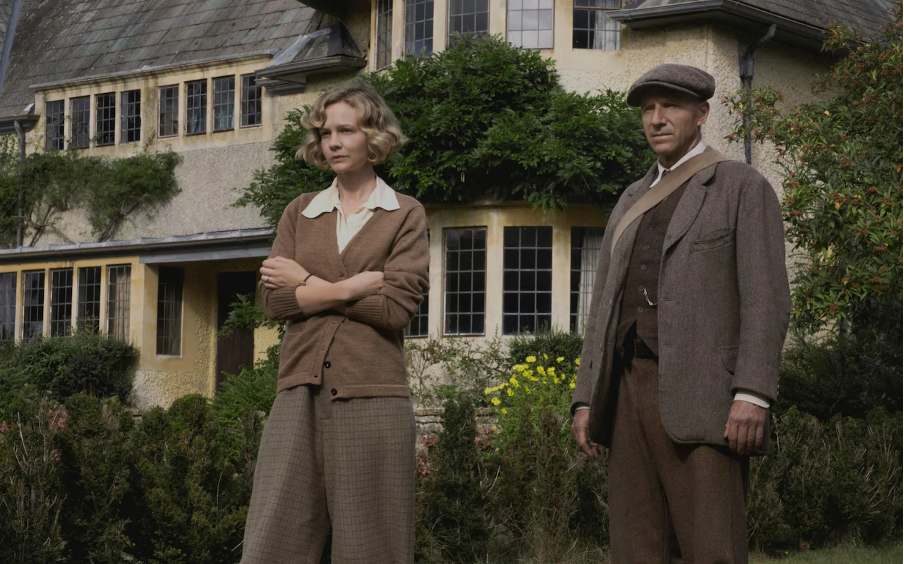 Carey Mulligan, left, and Ralph Fiennes in a scene from The Dig CREDIT: Larry Horricks /Netflix 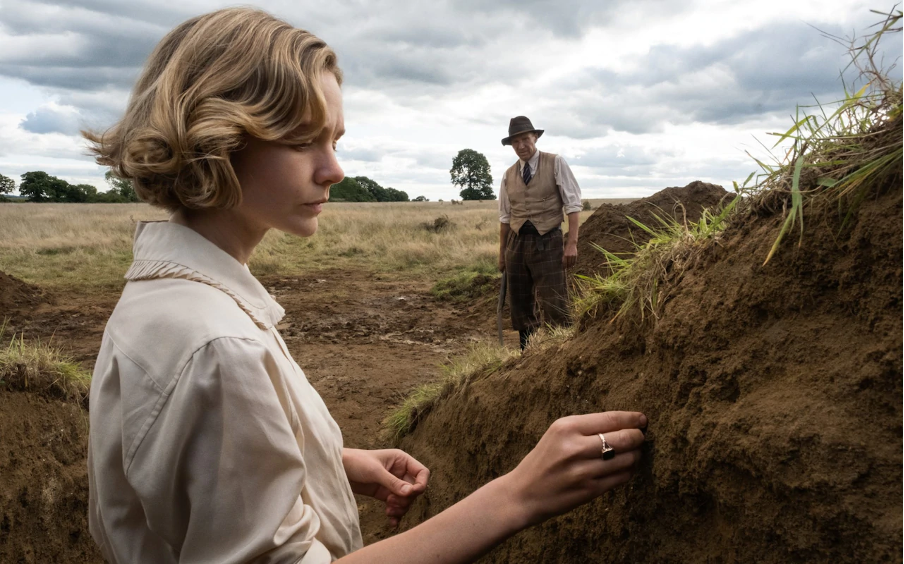 Brown was astute enough to recognise he had unearthed a Saxon longship, even though there were only traces left.

The treasures excavated at Sutton Hoo were not just gold and silver, but included the impression of the 98ft long burial ship left in the sand, like a vast footprint. Nothing remained apart from 3,598 iron rivets which once held its oak planks tightly together.  Once the sandy infill had been excavated, the rivets were left like a join-the-dots puzzle forming a virtual blueprint of the longship’s original design.

The drama charts the tensions as the significance of the discovery is realised by the British Museum’s own experts who had initially shown little interest.  Despite having been the one who made the discovery Brown was sidelined and replaced by the Museum’s own chosen expert, a professor from Cambridge University.

As filming took place last summer a team of shipwrights and volunteers from the Sutton Hoo Ships Company was scouring Britain for oak trees to remake the ship.  The search for a tree of suitable size took them from Northumberland, where they surveyed a forest planted for the Royal Navy by Nelson’s second in command Admiral Collingwood after Trafalgar, to Windsor Great Park, home to some of the largest oaks in Britain.

The search for the keel ended when the Trust’s chief shipwright Tim Kirk found a tall straight trunked tree in Forestry England woodland near Swindon after nearly a year of searching. Once the tree had been felled the ship builders had to move fast as they needed to use the wood while it is still “green” and malleable. Ten oaks will be planted in its place. 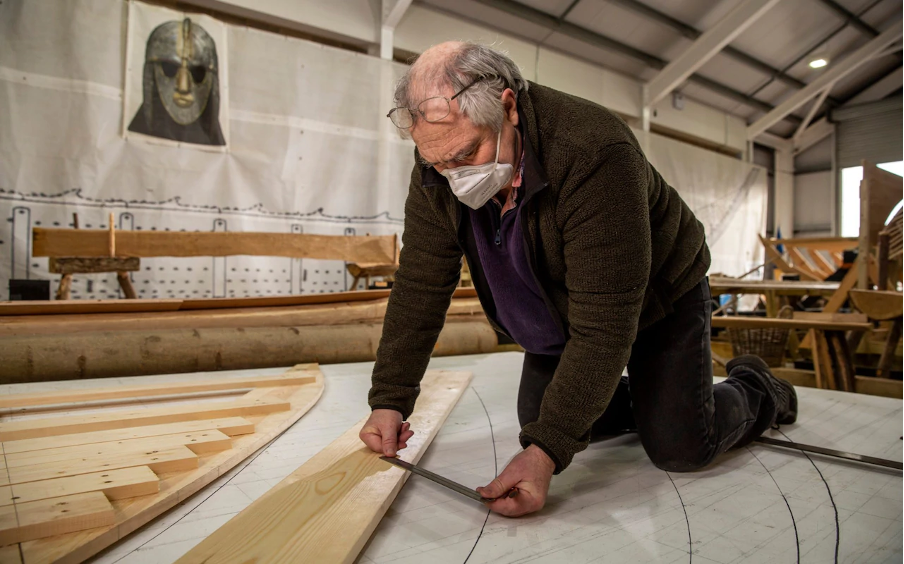 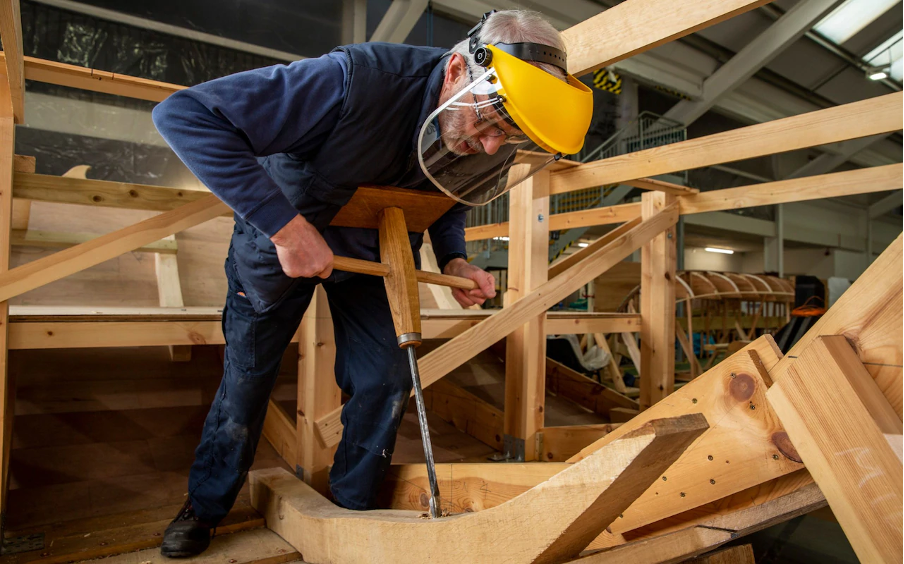 Mike Pratt using a traditional drill for fitting a rib to a scale practice section of the vessel CREDIT: Heathcliff O’Malley /The Telegraph

The 14m long trunk arrived in Woodbridge last week to join timber that will form the clinker planking, decks and ribs of the longship.  It is hoped the reconstruction will help answer some of the still outstanding questions about the Sutton Hoo ship, which was around 30 years old when it was used in the burial of an Anglo Saxon chieftain.

First science is trying to find out whether it was built in England or Scandinavia.  Anglo Saxons who crossed the North Sea from Denmark and northern Germany settled in England after the departure of the Romans left little trace here of any tradition of ship building.  There is no surviving vessel built within 200 years either side of the Sutton Hoo longship.

Although the hull had completely vanished there are traces of timber planking trapped in the rusty rivets and DNA testing should reveal whether it was built of English or European oak. Analyses of the rivets themselves suggests they were made from “bog iron” an iron ore gathered locally in East Anglia.

Once the replica is put through its paces on the River Deben, which runs close to the burial site, it will swiftly become clear whether it was rowed or sailed.

No trace of a mast remained but the central portion of the hull had been adapted to hold a wooden structure which was used as a burial chamber so it may just have been removed. Neither was there any no trace of its occupant, thought by some historians to have been King Raedwald, the first English king to convert to Christianity who died around 624, apart from a kingsize stain in the sand.

The volunteers building the longship are using the same tools as their Anglo-Saxon predecessors, which means no saws, only axes to cut the 90 planks needed for the hull.  The dozens of volunteers include a retired eye surgeon, several engineers and a former accountant who left her job to re-train as a shipwright but had no idea where to practise her new skills until she came across the Ship’s Company. 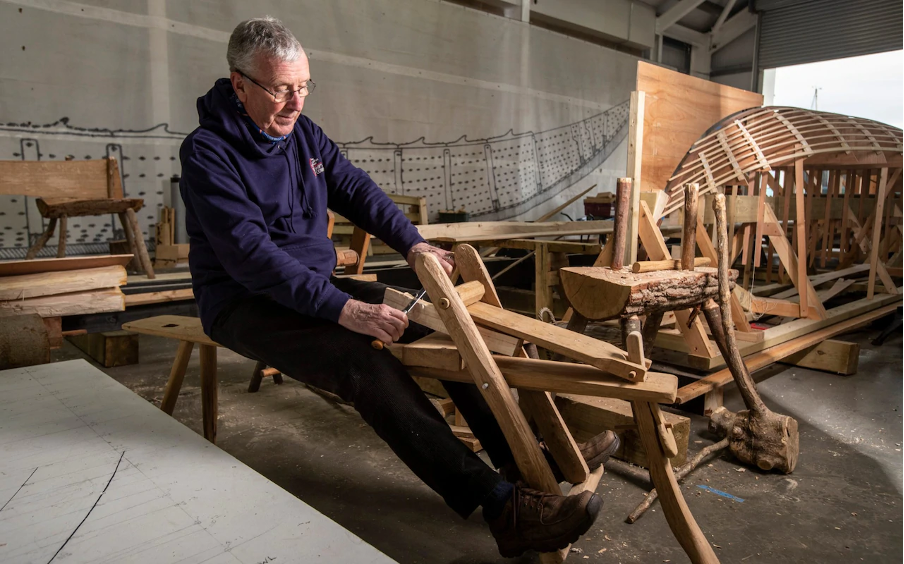 Philip Leech, a retired GP who chairs the charity, said that one of the things that still needed to be resolved was whether the boat was primarily rowed or sailed.   That in turn could give a clue as to whether it was a warship, a trading vessel or a royal barge.

He said: “Did they row standing up or sitting down? Perhaps the oarsmen each had a box of personal possessions which they could have sat on.”

He is full of praise for Basil Brown.  Dr Leech said: “It was perfectly cleverly excavated in 1939, the precision was stunning, you can really see every rib.”

During the war the site was used as an army training ground and when the ship was re-excavated it was no longer quite as pristine as a Bren gun carrier had squashed the imprint. The mound that is there today is a recreation.

The Sutton Hoo ship predated the Viking longships which raided Britain by hundreds of years. It was also an ancestor of the White Ship, the vessel in which the cream of the Britain and French nobility, including the heir to the English throne, drowned when it crashed at high speed into a rock off the Normandy port of Barfleur in 1120.

A replica of the White Ship is being built in parallel with the Sutton Hoo longship by the Oxford-based Institute for Digital Archaeology which is funding both projects. The Sutton Hoo longship is expected to cost around £350,000, considerably cheaper than a super yacht.  Eventually it will be used on the river at Woodbridge as part of a larger display related to Sutton Hoo.

Roger Michel, the IDA’s executive director, said the two ships marked the beginning and the end of an era of ship design.  He said: “The White Ship will help us answer a lot of questions about the Sutton Hoo ship such as was it sailed or rowed.

“We have descriptions of the White Ship and we know it was primarily a sailing ship and the oars would have been used like a motor in a modern yacht, for manoeuvring or moving short distances.

“We want to know if the Sutton Hoo ship was the same.”

The historian Charles Spencer, the brother of Princess Diana, who published a best-selling book on the White Ship last year, said: “I look forward to discovering possible connections between these two historic British ships. Learning more about the construction of both will provide some insights into medieval boatbuilding practices.”